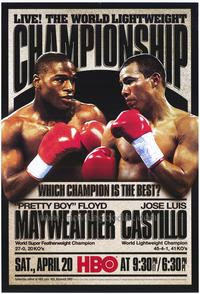 on in the upset of the year, followed up with a defence against former champ Cesar Bazan, Jose Luis Castillo still came into the ring as an underdog as he defended his WBC lightweight crown in Las Vegas against the highly backed Floyd Mayweather Jr., who had vacated his WBC super featherweight title after eight one-sided defences to fight at lightweight.

Nobody predicted that this fight would be the most debated in Mayweather’s undefeated career, and when Mayweather goes on and on about his spotless record, the haters have an asterisk next to the first contest between the two, touting is at the toughest contest the Pretty Boy has ever been involved in.

Mayweather controlled the first half of the bout with his slickness and skills, which earned him a lead over the opening half of the bout. But did Castillo stage enough of a comeback to scrape a decision? Or did he fall short? Should he have gotten the nod in a bout where he dominated the punch stat numbers?

The Boxing Tribune have replaced the judges with our own balanced panel. The three judges will be Dafs117, Damon and Richimerc, and they’ll give their round-by-round opinion, with a quest to find if Castillo was robbed at ringside.

Dafs117 – “Mayweather takes Castillo on a tour of their work space for the night as he dominates the opening round with his superior speed. Castillo tries to land a couple of wild lefts, but misses every time. Castillo walks back to his corner with blood trickling from his nose.” 10-9 Mayweather

Damon – “Mayweather touched Castillo a few times—nothing major, but moved Castillo backward. Nice jab landed at the end of the round punctuates it, but doesn’t decide it. Castillo just didn’t do much of anything.” 10-9 Mayweather

Richiemerc – “It’s a close round up until the last 35 seconds, where Mayweather connects with a right hand and a hard flush left, which is enough for me to give him the round.” 10-9 Mayweather

Dafs117 – “Floyd lands a left hook and Castillo tastes the canvas… but it’s wrongly ruled a slip in my opinion. Nasty clash of heads opens a slight cut on Mayweather. Nobody really taking the lead here, but Floyd has to press more than he would like. Still, easy Mayweather round.” 10-9 Mayweather

Damon – “From this vantage point, the slip looked like a knockdown—couldn’t see the feet. The head bump didn’t look like a fight-changer. Castillo showed some signs of life at 1:20, coming forward more than a step or two. Not enough. This was more of the first round: a somewhat less decisive.” 10-9 Mayweather

Richiemerc – “An accidental headbutt causes both fighters to check for blood, Mayweather coming off the worst. But he lands a counter-right hand at the end of the round to take it.” 10-9 Mayweather

Dafs117 – “The first close round of the fight that’s going to differentiate the cards. Mayweather lands more, but they were nothing of any significance. Castillo landed the two best shots of the round. For the activity, the round is swayed in Mayweather’s favour. Lederman gives it to Castillo.” 10-9 Mayweather

Damon – “Castillo was able to capitalize on some countering opportunities this round and was able to track down Mayweather a couple of times. To me, a close round, not easy to score. Mayweather was consistent, jabbing away, but Castillo won it with a couple of more meaningful connects.” 10-9 Castillo

Richiemerc – “A very close round, but Castillo’s the busier fighter and scores a very good combination at the end of the round.” 10-9 Castillo

Dafs117 – “First signs that Mayweather is uncomfortable as he starts switching to southpaw and turning his back in clinches. Castillo lands nothing of note all round, Mayweather just a little more, until Castillo sneaks in a left uppercut that levels up the round. Another round that could go either way. Lederman gives it to Mayweather. I don’t like giving even rounds I see it lazy, but this is splitting hairs. I opt for Mayweather.” 10-9 Mayweather

Damon – “Mayweather looked like he connected with a hook early, at 2:40 and later, 1:13. Another close round, but this one with better action, especially early. Then it was more Mayweather jabbing, mitigating Castillo’s pressure, but Castillo appeared to connect clean with a lead uppercut with just seconds left in the round. Close round.” 10-9 Mayweather

Richiemerc – “Very tough one to call. I don’t care what others say, this is a legit even round.” 10-10 Even 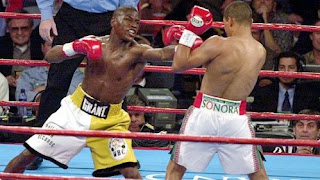 Mayweather wins the opening two minutes by topping everything Castillo does. Castillo has a big last minute, catching Floyd on a couple of occasions, and again makes it very close. It depends what style takes your fancy, a clean boxer or a more rugged slugger.” 10-9 Mayweather

Damon – “Mayweather again did his better work in the first third/half of the round—good-looking uppercut at 2:30. Then back to moving. Castillo made Mayweather look uncomfortable in this round, with Castillo looking to get busy inside. But Mayweather tied up, as at 1:05. Mayweather landed a nice right-hand counter at 0:15” 10-9 Mayweather

Damon – “Castillo did good work mid-round, trapping Mayweather, slowing him a bit, landing rights to the ribcage at :45 before the push/slip. Castillo’s best round of the contest, as he continued to pressure, jab effectively, and work on Mayweather’s middle.” 10-9 Castillo

Richiemerc – “Castillo wins the round with a rough brawling style and it looks to be an effective tactic against Mayweather.” 10-9 Castillo

Dafs117 – “In my opinion, this is the best round ever fought against Floyd Mayweather. Great boxing brain from Castillo, call it ring generalship if you want, excellent body work and crowding of the quicker Mayweather. Floyd had some good moments, similar to the third round, but Castillo overpowered and distinguished Floyd’s hopes by pressurising.” 10-9 Castillo

Damon – “This round is a continuation of the last, with Mayweather moving, only getting his shots in at spots early and Castillo’s pressure paying off later. A gorgeous last 20 seconds sealed it for Castillo—one-two, hook, right overhand.” 10-9 Castillo

Richiemerc – “Castillo dominates the round and clinches it with a brilliant last 15 seconds where he annihilates Floyd.” 10-9 Castillo

Dafs117 – “Mayweather keeps calm to out-manoeuvre Castillo by taking over the pace of the fight. Again, call it ring generalship if you want to sound fancy. Stupid cheap shot from Castillo, blatantly hitting Mayweather on the break. Loses a point, and maybe, losing his head in the fight.” 10-9 Mayweather [-1 deduction Castillo]

Damon – “This round was Mayweather doing his thing—moving and maintaining space, holding Castillo off. Mayweather’s lack of significant offensive output makes it close—the highlight was probably a Mayweather one-two at :25. Then there was the point deduction against Castillo for hitting on the break. I don’t think Drakulich wasn’t within his rights, but it’s unfortunate in a bout this close.” 10-9 Mayweather [-1 deduction Castillo]

Richiemerc – “For me, Castillo wins the close round but as he’s deducted a point for punching after the bell, it eventually pans out even.” 10-9 Castillo [-1 deduction Castillo]

“Now why was the referee in there breaking them up? They had broken themselves up, and they were ready to keep fighting.” (Drakulich breaks another clinch and tells them to ‘calm it down’ sparking one of the best moments of the decade) “What do you mean calm it down?’ It’s a fight! Referee’s telling two fighters who wanna fight to calm it down? He should calm down! Nobody paid to see this referee!” – Larry Merchant

Dafs117 – “Lampley drops an interesting ironic suggestion; a robbery in Vegas, Mayweather’s adopted hometown. Castillo’s point deduction could’ve finished him mentally or spark him, and it sparked him as he came out and pounded body shots in Mayweather’s direction. Mayweather rarely throws his right hand in this round, now we know because of injury. Floyd’s frustration is building and he takes it out after the bell, but Drakulich decides to let it slip.” 10-9 Castillo

Damon – “Castillo didn’t appear to be rattled by the deduction and looked much looser by this point. Mayweather still wasn’t generating much offense. There easily could’ve been a deduction on Mayweather at the end of the round for hitting after the bell.” 10-9 Castillo

Richiemerc – “Mayweather connects with a lot of punches early on in the fight and Castillo doesn’t land anything of note to even the round out.” 10-9 Mayweather

Dafs117 – “Even though Castillo relentlessly pressed Mayweather during the round, I felt Mayweather scored landed more scoring shots than Castillo, who’s punches were often defended by Mayweather’s Philly Shell. Round tarnished by a point deduction for Mayweather this time, maybe to even it up.” 10-9 Mayweather [-1 deduction Mayweather]

Damon – “Mayweather got off to a nice start this round, with some scoring shots early. He benefited from not biking around so much and landed a sweet little hook at 1:12 and some good counter shots subsequently, though Castillo came on so well in the last 50 seconds or so.” 10-9 Mayweather [-1 deduction Mayweather]

Richiermerc – “Similar situation to round 8, where Mayweather dominates the round only to be deducted a point for using his elbow.” 10-9 Mayweather [-1 deduction Mayweather]

Dafs117 – “Castillo has an answer to every Mayweather attack and his brawler style is far more effective against the on-coming Mayweather, who seems interested in fighting Castillo’s fight. Castillo’s body shots are landing clean this round.” 10-9 Castillo

Damon – “A lot more standing with Castillo from Mayweather. The back and forth made it a different round, an exciting round and a tough one to score. Mayweather got some opportunities taking a different approach, and he showed it in a couple of bursts—nice work at 1:02, but Castillo had an immediate answer every time and just kept digging to the body.” 10-9 Castillo

Richiemerc – “Close round, but Castillo does enough as his brawler style is more effective on the inside against Mayweather’s counter defence.” 10-9 Castillo

Dafs117 – “ Both looked like they wanted to win this round, egged on by their corners to make an impression in the final stanza. Castillo sticks to his gameplan and has real determination as he drives Mayweather backwards by cutting off the ring effectively.” 10-9 Castillo

Damon – “I fully expected to see Mayweather try to cruise here, at least a little if not a lot. And he moved less than I expected. Castillo fought like he really, really wanted this round. Cutting off the ring, completely the aggressor, landing clean shots to Mayweather’s body.” 10-9 Castillo

Jose Luis Castillo retains his belt with a draw

On the basis of The Boxing Tribune’s scoring, I wouldn’t class this fight as a robbery. It was a very close fight and a poorly officiated contest; with two needless point deductions and one judge having an off-night, scoring the bout 116-111 to Mayweather; 8-3-1 in rounds. Mayweather adapted his style to defeat Castillo in the rematch via more comfortable unanimous decision. He later became pound-4-pound king and five-weight world champion by defeating Oscar De La Hoya at 154 pounds. Castillo was involved in the fight of the decade, losing by tenth-round stoppage to the late Diego Corrales in a remarkable tenth round. Castillo won the grudge match, but battled weight problems that quickened his decline. Both fighters are still active, with Mayweather facing Shane Mosley on May 1.