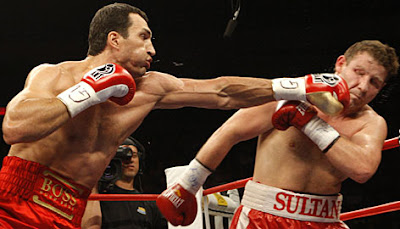 If you’re reading this in the United States, though, you’ll have to settle for a $14.95 internet-only pay per view screening on the small screen.

I sort of buy HBO’s excuse that the European start time would be too early in the United States and would take a beating against the NCAA basketball tourney. So, for the money required, the bout is not economically viable for the network. Ok.

But what I can’t understand is the sentiment among American fight fans and the almost glee some are taking that the fight isn’t being broadcast.

The excuse made is that the Klitschkos are boring and that Wladimir, especially, is a chore to watch.

However, these same fans that whine about the Klitschkos are often the same ones who have high regard for a guy like Ivan Calderon, the jr. flyweight champ whose fights often turn into mind-numbing track meets. And these are the same fans who tolerate Paulie Malignaggi’s jab-and-grabs and HBO-supported Rocky Juarez as he tries for one world title after another.

I don’t buy the critics’ sudden high standards when it comes to the fights they watch.

It’s more likely that the critics are just frustrated that no American fighter can come close to handling the Eastern European kingpins. Americans are supposed to rule the heavyweight division; It’s our division, home of Ali, Marciano, Dempsey, Louis and Frazier.

So, with an absence of dominant US heavyweights and with little hope for the future, the fans have just taken to ignoring the Klitschkos. “Let’s just close our eyes and make believe they don’t exist…we’ll open them in a couple of years and hope for the best.”

Yes, it’s frustrating to see fighter after fight fall at the hands of the Klitschkos, but since when has the American attitude been, “If you can’t beat ’em, marginalize ’em?”

It’s not Wlad’s and Vitali’s fault that Tony Thompson and Kevin Johnson couldn’t pull the trigger, it’s not their fault that Sam Peter and Ruslan Chagaev were shut out and it sure as hell isn’t their fault that Chris Arreola keeps losing the directions to his gym.

I’m not a big fan of the Klitschkos and I’ll be overjoyed if Eddie Chambers finds a way to bring home the world title, but I think it’s just plain petty that the American public, en masse, has decided to proudly snub the legit world champions.

Wladimir and Vitali Klitschko have taken on all comers and have conducted themselves with class and dignity. And, no, sorry…they are not overwhelmingly boring.

America, get over yourself…If you can’t build the perfect heavyweight, at least recognize the best of the best right now. You should be ashamed of yourself for marginalizing the world champion; You shouldn’t be celebrating the fact that you’ve succeeded in burying your head in the sand.