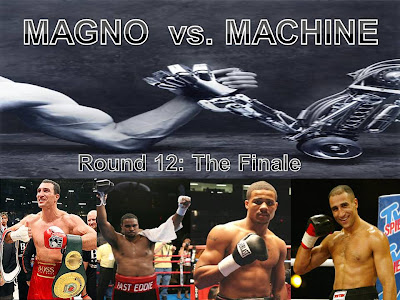 Paul Magno’s attempt to emulate John Henry, a figure from American folklore, concludes this week with a slight twist from the normal proceedings.

The toe to toe battle with Title Bout Championship Boxing in a 21st century boxing-related battle of man vs. machine has been competitive, with both still evenly matched going into the final round.

In the final round we’ll be combining the next two weekends, which starts with Wladmir Klitschko making his defense of his heavyweight championship against Eddie Chambers, and concludes with two fighters that kicked-off the contest, Arthur Abraham and Andre Dirrell.

John Henry was successful, but will Magno be?

Magno: This isn’t as easy as some would believe. Chambers, in his last fight, executed the perfect strategy against a taller, stronger Eastern European heavyweight. Yeah, Alexander Dimitrenko is no Klitschko, but nonetheless, it was a perfect game plan that I can see working against Wlad.

I’m tempted to pick Chambers in a shocker, but for the sake of the competition, I’ll make the safe pick and say Wladimir Klitschko via TKO 8. But, if Chambers comes to the fight in shape and focused, all bets are off.

Machine: In the machine’s view, Wladmir Klitschko is far the better fighter in this fight, and holds all the tools that are required to win this fight. He holds the WBO, IBF, IBO and The Ring Magazine’s version of the heavyweight championship. Basically, he’s dominating the division.

Eddie Chambers has a slight speed advantage, but everything else points to Klitschko’s favour, plus the added incentive of fighting at home, if Klitschko needs some home cooking of course.

The Machine doesn’t think he will, and predicts Wladmir Klitschko to be victorious via seventh round technical knockout. Eddie Chambers won’t be in the fight at all, and will be picked off by the taller and rangier Klitschko, who’ll continue his dominance at the top of the heavyweight division.