Joyi produced an outstanding performance as he controlled the fight from the outside with his southpaw jab that set up everything else in the South African’s arsenal. Joyi’s speed and power was too much for Garcia, who was rocked several times in the six rounds I caught.

This is the most meaningful fight in the division for a long time, with two of the top four sharing the ring, something unheard of in the 105 pound history. South Africa are known to produce some awful hometown robberies, but the wide scoring was deserved as Joyi won on scores of 119-109, 118-110 and 118-110. Joyi could be the best fighter in the division and he outclassed Garcia, who’s also a damn good fighter. 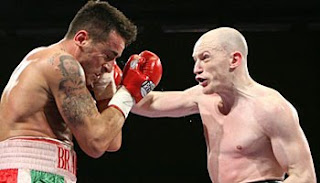 Hatton’s activity was too much for the aging Branco, who’s naturally a 140 pounder. Hatton seemed to ease off in the end, but Branco couldn’t capitalise as Hatton won a deserved victory in the end.

As for Hatton’s position in the welterweight division, he’s a long way away from the top 10, maybe even top 20, but his determination to get a title shot earns my respect straight away, even though I don’t rate him as a boxer.

Hatton deserves this victory for the effort he’s put in since he lost to Craig Watson, and to keep going in his older brother Ricky’s shadow. I actually want him to get a big payday against the big names he’s been linked with, I really think he deserves it.

In the co-feature, Sam Webb (16-1, 4 KO) rolled back to the amateur years to pull off a surprising result by putting on a stellar performance as he eked out a majority decision victory over Anthony Small (23-2, 16 KO) to win the British and Commonwealth light middleweight titles.

Small began the fight his usual self, showboating for no apparent reason, taunting his opponent while flicking out meaningless punches. Despite being cut in the fifth, Webb started to dominate proceedings by drawing Small into a brawl, which Small didn’t want.

Small gassed in the seventh, and after excellent corner work to close Webb’s cut, he picked up the pace to attempt to punish Small. Small wobbled all over the place in the ninth, but recovered to last the distance.