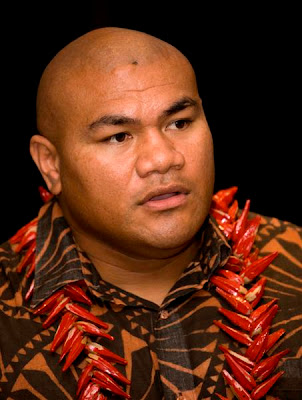 In front of a largely biased Tua crowd, the ‘Tuamanator’ controlled the proceedings against Friday ‘The 13th’, who talked his way into a fight with Tua by claiming he ruined Shane Cameron before Tua took all the plaudits.

Ahunanya decided to fight at distance, pecking and flicking from time to time, getting success but not in droves. Tua was frustrated but relentlessly pressurized, winning the majority of the rounds on punch output.

It’s worth noting that Ahunanya has never been decked before, and I think everybody underestimated him in that area. He was durable, and wasn’t even wobbled by Tua, who did land his fare share of trademarks left hooks and straight rights. His defense was sharp if his offence wasn’t, and Tua had to be patient by accepting a decision win before going in reckless. The judges scores were 120-108, 119-109 and 117-111. The BTBC also had it 119-109.

The performance was there, but the statement wasn’t. Tua had done all the right things; weighing-in at a respectable 239 pounds, he fought a tactically good fight, entertained the home crowd; but the Klitschko’s heads have definitely not been turned.

There were rumors that the IBF were waiting on Tua to make a decision on their next round of eliminators, even though Alexander Povetkin, the current mandatory, and Wladimir Klitschko, the current king, are in talks over a fight in August.

But why should a Klitschko, Wladimir or Vitali, give a dangerous puncher a shot at the title, when his last win over a real contender was against Michael Moorer in 2002? There’s no logic to risking everything to impress a couple of casual fans who remember Tua as the dangerous knockout machine from the 90’s.

The blueprint is already down on how to beat Tua, coincidentally created by another Nigerian, Ike Ibeabuchi, which is no shame on Tua’s part. So Tua needs to beat a legit contender to even get on the Klitschko waiting list, which is pretty long at this moment in time.

Referring back to the rumour mill, Tua could be facing old rival Hasim Rahman to complete their long-awaited trilogy. But still, Rahman is hardly active, fighting for the first time since the Klitschko loss last week with a KO-1 victory over a premium tomato can. He’s not a contender either, unranked in the top 15 by the major governing bodies.

Tua needs to step-up fast and fight top 10 fighters if he wants to be taken seriously. We’ve heard this all before from other post-prime fighters that their comeback trail will lead to the world stage. Very few have walked the walk, and the time is ticking on Tua.