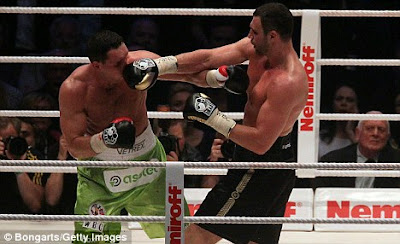 Vitali Klitschko (40-2, 38 KO) took his time to take out a resilient Albert Sosnowski (45-3-1, 27 KO) in the tenth round in his fourth defense of his WBC heavyweight title in Gelsenkirchen, Germany.

Klitschko won every round on The Boxing Tribune’s unofficial scorecard, and although Sosnowski did some good work in the third and fourth, Klitschko dominated the entire fight. Vitali was an enormous favourite going into the fight, and it resembled in the one-sided performance.

Vitali came out in the ninth landing numerous power shots to take away Sosnowski’s legs. The ending was inevitable, and it came with forty seconds left in round ten, when a straight right hand landed on the button and finished Sosnowski off.

Using this fight as a measuring stick, I would say that Vitali is pretty vulnerable for anyone with a little hand speed and footwork. If Sosnowski can be competitive in the early rounds by using some moderate speed, you would think that Haye and Adamek would box circles around the Ukranian brother.

So yes, to be blunt, I would pick both Haye and Adamek over Vitali right now. He just looked old, and a little bit fed up of boxing. He was still in fantastic condition, and maybe took the fight a little lightly, but there were signs that age was starting to catch up with him.

On the undercard, Jonathan Banks (24-1-1, 17 KO) bored everybody yet again, this time against journeyman Jason Gavern (19-7-4, 8 KO) with a twelve-round majority draw. The cards came in at 115-111 for Banks, and two 113-113. Gavern now has two surprise results in his last two fights, the other being a split decision victory over Manuel Quezada earlier this year.