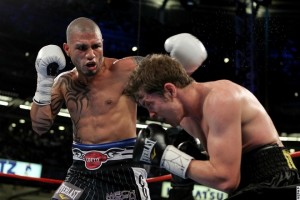 Cotto, 153.5, utterly dominated the fight, wobbling Foreman, 154, on numerous occasions with hard straight punches early on. It was obvious that Cotto was the more powerful and complete fighter at this point, as Foreman struggled to deal with Cotto’s pressure tactics implemented by new trainer Emmanuel Steward.

Foreman scored well in the fourth, but it was still all Cotto. The Puerto Rican was sharp and definitely in the zone, as he utilized his jab effectively to set-up right hands, that Foreman had no answer to.

The turning point came in the seventh, where Foreman slipped twice on those ludicrous advertisement logos, injuring his knee, which affected his mobility from then on. Cotto took advantage and went in for the kill, but Foreman showed great bravery to fight on despite struggling to get off the ropes.

The eighth stanza was insanely confusing, as the towel came in from Foreman’s corner but ignored by referee Arthur Mercante Jr. (USA). Foreman’s trainer Joe Grier then entered the ring to stop the fight, but Mercante Jr. was having none of it, and didn’t disqualify Foreman for his trainer’s actions.

It wasn’t long until the fight was stopped, as Cotto’s trademark left to the body put Foreman down in the ninth, with referee Mercante Jr. waving away the contest at the 0:42 mark.

Cotto was back to his old self to some extent, using effective aggression to bully his opponents, and winning the rounds with steady boxing. Of course, the scars of Margarito and Pacquiao will always be there, and will hinder his performance against any of the elite, but at least there were signs of life in Cotto, that he definitely isn’t shot.

It was a beating, and not really a competitive one that I thought it would be. Foreman was simply outclassed, and might have been caught up in the whole occasion. The media will always love the back-story of an Israeli import from Belarusian decent, combining boxing and rabbinical studies in his day-to-day life, who is also married to a model. I mean, what media wouldn’t.

Cotto has picked up his third division title, and has plenty of options at both junior middleweight and welterweight. I wouldn’t mind seeing a rematch with Shane Mosley, or a fight with Andre Berto, but please, keep Manny Pacquiao and Antonio Margarito well away.

At the halfway point I had Martirosyan ahead by a round, and it was reasonably good, competitive action up to that point. After the fifth, Greene did nothing as Martirosyan’s 1-2 were the only punches been thrown at all really.

In the tenth round, Roy Jones Jr., who replaced Manny Steward for this broadcast, pointed out that Greene had more interest in the TV screen in center field. The third time Greene glanced up at the screen, Martirosyan knocked him down. It was like it came out of a crap Disney sports movie.

Judge Julie Lederman (USA) scored the contest 98-91, and judges Tom Schreck (USA) and Bill Costello (USA) had it 96-93, all in favour of former Olympian, Martirosyan.

Mecklenburg-Vorpommern, Germany – In what started off as a lacklustre fight that later on turned into a bit of a scrap, IBF middleweight titlist Sebastian Sylvester (33-3-1, 16 KO) held on to his belt after drawing with Roman Karmazin (40-3-2, 26 KO).

The ebb and flow of the fight constantly changed throughout the twelve rounds, with no-one taking the initiative in a competitive battle. Sylvester, 159.5, started off by plainly jabbing with his left, while Karmazin, 157.5, mixed up combinations on the inside, with his left hook being effective and his best punch of the fight.

The action was sparse in the middle rounds, until the eighth, where Sylvester’s right hand began to pick the on-coming Karmazin off. In the tenth round, Sylvester rocked Karmazin with more right hands, opening a nasty looking gash above the former junior middleweight titlist’s left eye, which deteriorated further as the fight progressed.

The final two rounds provided decent entertainment, with Karmazin bullying the increasingly tired Sylvester, landing enough punches to gain ground on his German adversary. But it wasn’t enough on my card, as Sylvester edged it 115-113.

Judges Matthew Podgorski (USA) and John Lawson were way off the mark with their scorecards, insanely scoring the fight 117-111 to Karmazin and 118-111 to Sylvester respectively. Pasquale Procopio (CAN) saw it a respectable 114-114.

The official result took just under ten minutes to calculate, which caused a minor scuffle to break loose at ringside. Sadly, no corrupt affiliates were hurt, but the timekeeper was. Injustice!

At 37, this is probably the last we see of Karmazin at world title level. Sylvester hardly looks like a world beater, and has plenty of third-tier fighters to choose for an easier return to the ring.

In the co-feature, Steve Cunningham (23-2, 12 KO) came off the canvas to thumb Troy Ross (23-2, 16 KO) in his left eye, opening up a freak cut in the process. Referee Bill Clancy (USA) stopped the contest on the advice of the ringside doctor, handing Cunningham a fifth-round technical knockout win and an IBF cruiserweight strap to go with it.

The opening two rounds were sloppy, as Cunningham, 193, looked rusty in struggling to gage the distance to land his jab and right hand, while Ross, 193.75, threw reckless hooks that rarely hit the right note. Both fighters settled down in the third and the fight promised to live up to its expectations as a highly competitive match-up.

Ross landed the first significant power punch of the fight, flooring Cunningham with a perfect straight left hand in the fourth. Cunningham, who seemed slightly off-balance at the time of the knockdown, rose quickly and retreated before catching the on-coming Ross with a right hand on The Contender winner’s left eye. Ross immediately winced in pain, and replays showed that Cunningham’s thumb landed directly on the eye.

Both fighters were in tip-top condition and proved that they belonged near the top of the cruiserweight division. I don’t know how long Ross will be out with that injured eye, but I sure do hope it’s not for long. He’s for real.

Cunningham, who recently signed with Sauerland, can look forward to a unification fight with Marco Huck, who he’s already beaten once already. The winner would be crowned the lineal 200-pound champion, filling the vacancy left by Tomasz Adamek as he campaigned at heavyweight.

Or even more amusing, and slightly less realistic, Sauerland are planning a “Super Six or Super Four or unification fights” style tournament. Yes, we’ve been here before, and yes, Kalle Sauerland makes no sense. Cunningham would line-up with WBO titlist Huck, WBC titlist Krzysztof Wlodarczyk and possibly Yoan Hernandez, with nobody really bothered about WBA belt-holder Guillermo Jones. Bear in mind, Cunningham has defeated every current titlist, so I would make him the favourite, but not by much. Huck and Wlodarczyk have improved a lot since they fought ‘USS’.

Ross has protested the result. I roll my eyes.

Yoan Pablo Hernandez (22-1, 11 KO) doesn’t seem bothered about building on his breakthrough win over Enad Licina, as he continues to fight lower level opposition. Hernandez shutout upset artist Zack Page (20-29-2, 7 KO) over eight rounds, with all three judges scoring it 80-72 for the Cuban.

Istanbul, Turkey – Hometown welterweight Selcuk Aydin (20-0, 15 KO) got the nod in an extremely close contest against Ionut Dan Ion (26-1, 14 KO), winning by hotly disputed split decision. Aydin floored Ion in the first, but it didn’t seem legal as it was a rabbit punch. Aydin continued his dominance to win the opening four rounds, but it seemed that Ion had done enough to claw his way back to win the fight. Only judge John Keane (ENG) saw it that way, 116-111 to Dan Ion, while Daniel van der Wiele (BEL) and Bela Florian (HUN) awarded Aydin the victory 114-113. Aydin becomes the first clown to fall for the WBC Silver belt charm.

The 2004 Olympic silver-medallist emphasizes the growth in the number of Cuban prospects that are on the rise in the sport. The Cuban defector had no problems dispatching Ramos inside the distance as he commanded the fight from the opening bell.

Tampa, Florida – On Telemundo, unbeaten Filipino Mercito Gesta (18-0-1, 8 KO) steamrolled Oscar Meza (19-4, 17 KO), knocking him down with a body shot in the fourth before Meza quit on his stool after the round was done.

Team Gesta had done their homework on Meza, who provided barely any resistance after the opening round. When Gesta planted his feet, Meza simply had no answer and crumbled into a turtle shell defense. This was Gesta’s best win, and best performance in his professional career to date.

On the undercard, Noe Gonzalez Alcoba (24-1, 16 KO) continues his rise in the middleweight rankings with a sixth-round knockout win over Jorge Munoz (22-5, 11 KO), who also faded after a good first round.

Peterlee, England – Retirement beckons for Ian Napa (19-9, 1 KO) who dominated the proceedings against Stuart Hall (8-0-1, 4 KO) for the vacant British bantamweight title, before retiring in the eighth round.

Napa, 118, is now 1-3 in his last four, and his career seems to be drawing to a close after another domestic setback. Napa blamed the weight, which made him feel hot and feint in the corner following the eighth stanza. I had Napa 78-74 ahead at the time of the stoppage.

This is a colossal win for Hall, 117.5, who is a roofer by day. It was the first time Hall had gone past six rounds, and Napa represented a massive step-up in class for the Darlington boxer.

Olympic bronze-medallist Tony Jefferies (7-0, 5 KO) improved his record with a second round technical-knockout win over Matt Hainy (6-2, 0 KO) on the televised undercard.