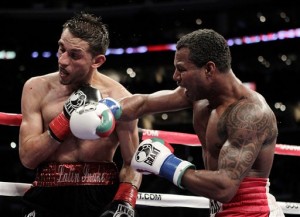 Re-cap: In one of the most unsatisfying performances of the year, Sergio Mora clinched, feinted and generally stunk up the joint against Shane Mosley. Mora landed, possibly, a half-dozen meaningful punches the whole fight and did little to truly pursue a win. Mosley, on his part, was coming forward, but was stopped from doing anything worthwhile by Mora’s pure defensive posture. By the way, The Boxing Tribune scored the fight 114-114, despite HBO’s indignation. However, the draw had more to do with Mora simply refusing to engage and trying to negate Mosley.

What this means to Mosley: Wasted time in a career that is already in its final stages.

What this means to Mora: “The Latin Snake” made a case for forever being barred from HBO and will likely lose any Mexican fan base he had coming into the fight.

What this means to fight fans: Nothing. It just serves as proof that if a skilled fighter refuses to really fight, there really is little anyone can do about it.

Re-cap: A solid, but unremarkable performance from the 20-year old Alvarez…until the very end where he crushed Baldomir with a hook.

What this means to Alvarez: A headline-grabbing stoppage of a former world champ with a famously solid chin.

What this means to Baldomir: The end of the line for the 39-year old from Argentina.

What this means to fight fans: Are you ready for the “El Canelo” hype machine?

Re-cap: Ortiz toyed with a shot Vivian Harris, knocking down the former world champ with every serious punch landed. It took the ref four knockdowns in three-minutes time to stop the farce.

What this means to Ortiz: Another name on his resume.

What this means to Harris: Hopefully, the end. Harris simply has zero punch resistance.

Re-cap: An experiment in what happens when a Telefutura-level fighter faces an HBO-level fighter. Escalante was overmatched and, really, was never in the fight.

What this means to Ponce de Leon: Officially becomes the mandatory for Juan Manuel Lopez’s WBO crown, but don’t expect him to jump at the chance to rematch the guy who KOd him in one.

What this means to Escalante: Back to ESPN, Telefutura and regional titles.

What this means to fight fans: Further proof that the featherweight division is stacked.