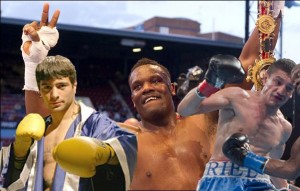 It’s no secret why they made Rocky a boxer and not a football player, golfer, or jockey.

In no other sport can a seemingly hopeless challenger step up and turn the world on its ears with one magical, historical performance.

Most of the time, unknown challengers are unknown for a reason; They are either regional/national champions who somehow manipulated one of the sanctioning bodies into a title shot or they’re club fighters who simply managed to be at the right time at the right moment.

Here are three fighters who stand on the verge of magic or disaster:

Lucas Matthysse (vs. Zab Judah): This slugger from Argentina can claim his piece of the ever-growing 140 lb. pie by beating the favorite, Zab Judah, on November 5th. Gifted with heavy hands and a reputation as a tough street fighter, Matthysse hopes to be the second Argentine to upset  a distracted Judah looking ahead to bigger fights .

The jr. welterweight division is sizzling right now with Amir Khan-Marcos Maidana booked for December 11th and Timothy Bradley-Devon Alexander signed for January 29th. Throw in Victor Ortiz-Lamont Peterson and Judah-Matthysse and, suddenly, you get some real fan-favorite action taking place over the next 90 days or so.

Judah is expected to win and move right into the 140 lb. picture, but if he looks past Matthysse, like he did against Baldomir 4 years ago, he could very well be put to sleep.

Freddy Hernandez (vs. Andre Berto): On November 27th, Andre Berto finally steps back into the ring against the unheralded and relatively unknown Hernandez to defend his WBC Welterweight title.

Berto has received buckets of criticism, some fair and some not,  for the way he’s conducted himself during his 28 month title reign. The Hernandez fight came about because mandatory challenger, Selcuk Aydin, wouldn’t come to terms and back-ups, Mike Jones, Alfonso Gomez, and Andreas Kotelnik couldn’t be signed for one reason or another.

But the tall and thin Hernandez, nicknamed The Rail in Spanish, is a legit bad-ass with one punch power and nothing to lose.

Berto will be the heavy betting favorite, but Hernandez, if he fights with the same urgency as in his other fights,  is sure to put up a battle. With all the money floating around the welterweight division and the lack of names on Hernandez’s resume, it’ll be real easy for Berto to look past the 5 ft 10 fighter from Mexico City.

All it takes is one moment in time and Berto could find himself on the outside looking in at a brand new Welterweight landscape.

Dereck Chisora (vs. Wladimir Klitschko): The world is expecting another easy win for the IBF/WBO Heavyweight Champion of the World and, frankly, there’s nothing on Chisora’s record that would indicate otherwise.

The reigning British Heavyweight Champ has only 14 pro fights with wins over Danny Williams and Sam Sexton standing out as the only two name fighters on a fairly pedestrian resume.

Common sense would indicate a slaughter in favor of Klitschko, but boxing often walks in the realm of the unbelievable and surreal. A Chisora win would be the biggest upset since Douglas KO’d Tyson, but nothing’s impossible and, if it did happen, boxing would once again be a headline on every sports page from Berlin to Beijing to Boston.

Who knows if any of these upsets will take place. The probability is that all three favorites will win decisively and business goes on as usual, but boxing thrives on being the theater of the unexpected. Major upsets and monumental shifts in the fabric of the sport can take place in the time it takes to land one well-timed left hook. The best bet is to just stand back and stay tuned.