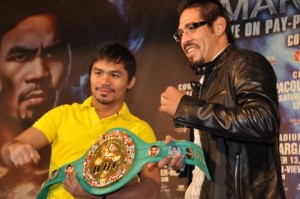 When boxing columnists write about reform in the sport, most fans nod in agreement while reading along. But when the article is over and the reality sets in, the question they always ask is, “What, exactly can we do?”

The sad reality is that not many people in the boxing business these days take the fans into consideration.

These days, the fans are merely an accessory. The fighters get paid based on what the network is willing to pay and the live gate is merely a prop to make for a more entertaining show.

Golden Boy has issued statements insinuating that if the fans don’t support a specific PPV show, they shouldn’t complain anymore about weak cards. And Bob Arum, head honcho of Top Rank, has literally told the fans to go “fuck themselves.”

So, if Joe and Jane Fan feel like impotent, second class citizens, it’s completely understandable. Baseball fans get Fan Appreciation Weekend and special giveaways. In boxing, we get sold an inferior product and get told to go fuck ourselves if we don’t like it.

But, still, it’s the fans who drive the sport, whether as anonymous Nielsen ratings/PPV buys or as human beings in a seat, buying a beer. Without the fan support, boxing shrivels up and goes away.

Next Saturday’s bout between Manny Pacquiao and Antonio Margarito provides the fans with a generation-defining opportunity to make a stand and tell the sport’s power brokers that enough is enough.

The Pacquiao-Margarito affair at Cowboys Stadium in Dallas, Texas is everything that’s wrong with boxing, shoved into a twelve round limit and packaged for 60 bucks via pay per view.

A corrupt sanctioning body, a corrupt commission, and a sleazy promoter all converging to make a gigantic money grab with little regard for the sport, the fans, or even simple human ethics. “The Unholy Trinity of Boxing,” operating right out in the open with impunity and a cynical sneer for those who can’t and won’t be bought.

Obviously, Antonio Margarito shouldn’t be fighting and, certainly, shouldn’t be making a 6 million dollar paycheck for attempting to pummel Shane Mosley with intentionally doctored knuckle pads. Ghost of Luis Resto be damned, but the guy never took responsibility, didn’t care to live up to the California Commission’s sanction, and even openly mocked the ruling every chance he got. So arrogant was Margarito in his disrespect that he was already signing on for this mega-fight before even stepping foot into the hearing for reinstatement.

Those unaffected by the whole “Plaster Gate” debacle aren’t likely to come around now, almost two years later and after all the time and money Top Rank invested into repairing Margarito’s image.

But what about Manny Pacquiao?

Pacquiao is one of the elite fighters of this era and does not have a lot of time left in the sport. Is it fair to waste his time and our time with meaningless quests for paper titles? Isn’t it morally hypocritical for Pacquiao to knowingly put 6 million dollars into the hand of a convicted cheat? Both Pacquiao and trainer, Freddie Roach acknowledged their belief that Margarito knew about the inserts, so why go along with the sham? Regardless of Manny’s convenient act of being a simple country boy who fights whoever put in front of him, he is the boss of everything that goes on in Team Pacquiao. Arum, Roach, etc…They all work for him and it’s his ultimate signature that’s needed to go ahead with any plans.

Surely a man with his well-publicized moral fiber would balk at the idea of laying this huge payday and massive opportunity at the feet of someone he felt cheated his way to the top and didn’t really earn it. You would think, right? There are plenty of deserving fighters, from 140 to 154 who could and should take this opportunity and who would bring out the best in the future hall of famer. Margarito, like many of Manny’s recent foes, is not too far separated from a devastating, career-defining loss. Manny Pacquiao, Fighter of the Decade, deserves better than to be fighting Shane Mosley’s roadkill. If Manny wants to grab an eight title in as many divisions, it would be nice to do so against the best in the division…or even one of the top 10 or 15.

Now, assuming that Margarito’s arrogance and Pacquiao’s ambivalence isn’t enough to turn off the paying public, what about the fact that this will be a bout for the WBC Jr. Middleweight title between a fighter who has never competed in the division and one who has only one fight at the 154 lb. limit in six years?

No, this isn’t the first time that an undeserving fighter has fought for a title. There are plenty of crazy sanctioning body decisions to make one’s skin crawl, but when infested with rats, the 3-foot high Tijuana sewer rat naturally gets the most attention.

This fight is just one big sanctioning fee for Jose Sulaiman and the WBC– high six-figures at the very least. Pacquiao, should he win, has no intention of even defending the belt and Margarito is still unlicensed in 49 other states if he should somehow pull off the upset.

Throw in an arbitrary 150 lb. catchweight clause, the appointment of Laurence Cole (son of Texas commission head, Dickie Cole) as referee, and the skeevy sales job needed to sell a sack of burro manure as a bag of gold.

The Unholy Trinity of Boxing has attacked the sport from every angle this time– from the moral/ethical right down to the practical/competitive side.

When it became apparent that Bob Arum would opt to play the Pacquiao cash cow safe by choosing an in-house opponent, Jose Sulaiman dove right in and cleared the way for a WBC jr.middleweight title fight by showing reigning champ, Sergio Martinez, the door. Then, when it was becoming clear that no commission would sanction an unrepentant cheat like Margarito, Dickie Cole openly courted the fight for his home state and even made the ridiculous statement that the doctored knuckle pads “might have been there only to protect Margarito’s hands.”

From the beginning, Arum knew this would be a tough sell, even to a usually less than selective target group. He’s invested lots of money and manpower into churning out one ridiculous fluff piece after another about this fight, surely cashing in favors to sick his ever-growing cadre of media shills on an unsuspecting public. He even tried to cash in on the sports headlines by signing up Mexican female reporter Ines Sainz, of Jets locker room fame, (a journalist so vapid that she once asked a member of the Steelers’ defensive line: “who is the most in-shape quarterback in the NFL?”) to do updates for the Latino community.

The initial 6 to 1 betting odds against Margarito were handled via “friendly” news sources by constantly pushing the “Pacquiao’s distracted/Margarito looks awesome” story every chance they could.

If Arum can sell a 6 to 1 fight between one fighter who shouldn’t be fighting against one who should be doing something better for a belt they will never likely defend in a division they don’t belong in, it will be a testament to the old man’s abilities as a promoter. Consider this the Mona Lisa of preying on customer gullibility; A masterpiece in cynical matchmaking.

But this takes us back to the very beginning.

What can the fans do in the face of three powerful entities, hell bent on lining their pockets at the expense of the sport?

The simple answer is to simply not buy the product.

Every purchase of Margarito vs. Pacquiao is a vote for the status quo in boxing– A vote for the unethical way the sport is run and a show of support for those cynically underestimating the intelligence and resolve of the boxing fan base.

A successful pay per view this Saturday will be a sign to the boxing power brokers that the fans, given the right packaging and promotion, will always be an exploitable source of quick, easy money.

There’s no doubt that Arum will have a packed house for the event, even if he has to paper the city of Dallas with free tickets and arrange 2 for 1 giveaways. Cowboys’ stadium will be packed and he will get his 60,000 attendance even if it’s not actually 60,000 (Independent sources cite the paid attendance for Pacquiao-Clottey to be 36,000, not the 51,000 cited in the boxing media).

The question will be whether fight fans at home, and with time to consider what this entire event actually represents, will spend their hard-earned money on something that serves as a great big “Fuck You” to those who truly love and follow the sport.

A quick hunch would be that “fight fans–” those who just want to watch two fighters going at it and don’t care much for the history or narrative of the sport– will be easier to sell to than real, hardcore “boxing fans,” who care for the sport as an entity and respect its conventions.

Whatever the case, fans will be presented with a real, concrete way to make a stand for reform in boxing and against the despicable way the sport is currently run.

Let’s see how this plays out.

If you enjoy this, you’ll also enjoy:

Say “No” to the Alphabet Soup Organizations in Boxing

Jose Sulaiman on Margarito: “The CSAC attacked a Mexican fighter!”