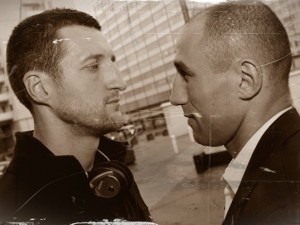 Two warriors stand in the rubble of the Super Six World Boxing Classic, both looking to salvage their reputations while the tournament crumbles all around them.

Andre Dirrell and Mikkel Kessler have opted out, Jermain Taylor and Allan Green were forced out, and the 41-year old Glen Johnson, a natural 175-pounder who hadn’t fought at the 168 lb limit in over a decade, has suddenly found himself in the semi-finals after knocking  Green out a few weeks ago.

Both Carl Froch and Arthur Abraham, who are coming into their contest following tough losses, have also taken their fair share of shrapnel in the all-out super middleweight battle royal.

In April, Froch dropped a unanimous decision to Mikkel Kessler in a hard-fought battle which saw “The Cobra” fight his heart out, but wind-up a step behind “The Viking Warrior.” Before that, Froch would take a controversial split decision victory over American, Andre Dirrell, in Froch’s native Nottingham. Both fights exposed some weaknesses in his game, but also showed the world that Froch was a true warrior, willing to throw leather for three full minutes of twelve complete rounds.

Abraham, on the other hand, started out the tournament with a literal bang as he not only knocked Jermain Taylor out of the Super Six, but also entirely out of the sport  with a brutal twelfth round KO. After that, Abraham would struggle in the first two-thirds of his bout with Dirrell, before picking up steam late. Unfortunately for him, an illegal punch to Dirrell, who was on the canvas following a slip in the eleventh , cost Abraham any chance of a come-from-behind KO. The resulting DQ loss ended Abraham’s status as number one on the Super Six leaderboard.

Most frustrating for both of these modern day gladiators is that, due to the tournament withdrawals of Kessler and Dirrell, neither will be able to avenge their losses any time soon. So, instead, this Saturday, November 27th in Helsinki, Finland, Froch and Abraham will take their frustrations out on one another.

The prizes at stake: A move up on the tourney leaderboard and, recently added, the vacant WBC super middleweight title vacated by Kessler after he retired from the fray, citing an eye injury.

But, after seeing them react with one another at various press conferences and through media quotes, it’s obvious that they’d be willing to go to war just on principle and professional pride alone.

“He will need his guard on Saturday,” said Froch, referring to Abraham’s characteristic high-guard defense. “If I hit him clean and sweet early, it could be over quickly.”

Abraham wasted little time in responding, “Froch has insulted my promoter, my team and me. I will punish him for that on Saturday. It will be a great fight between two warriors. I cannot wait to get my hands on him and make him pay for all the rubbish he has said in the press.”

But despite the harsh words and obvious rivalry, the fight almost didn’t come off as neither side was too willing to give up home field advantage for this crucial contest. Abraham wanted the fight in Germany; Froch wanted it in the UK. After a lot of back and forth, the compromise was made to hold the contest October 2nd in Monaco.

And then the Monaco deal fell through after a Froch back injury force a postponement.

More back and forth ensued, sprinkled with uncertainty as the Super Six began to implode and the next round of tournament fights were suddenly being scrapped while two of the major participants decided to pull out.

Froch and Abraham would pull through the mess, fueled by an honest regard for the fans and a genuine hunger to prove their dominance to the world and, just as important, to one another.

This Saturday, they finally meet. Both are already in the tournament semi-finals regardless of the result of their clash.  A win for Froch would mean a #2 seed in the tourney and, likely, another clash with Abraham before meeting up with the winner of Andre Ward-Glen Johnson. A win for Abraham is a little more complex since the manner of victory would make the difference in determining his opponent (A KO win means another battle with Froch while a decision win means a showdown with Johnson.)

But, really, all of this is just an afterthought.

When two warriors go to war, nobody is paying attention to a leaderboard.

Time to move on from Super Six fantasy

Will a loss for Kessler kill the Super Six Tournament?