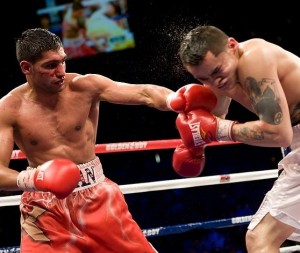 Recap– Khan came into the ring the better, more polished athlete; Maidana was the rock-throwing brawler. Both fighters lived up to their reputations. Khan dominated early with his hand and foot speed, picking Maidana apart from the outside. Maidana would get dropped in the first round by a vicious Khan left hook to the body and a point was deducted from Maidana in the fifth for throwing an elbow. The fight momentum turned around big time in the later rounds as Maidana connected with some monster shots that badly rocked Khan and forced the reigning WBA 140. lb. titlist to literally run for his life. The late surge proved to be too little, too late as Khan would go on to win the contest  by scores of 114-111, 114-111, and 113-112. The Boxing Tribune scored the fight 115-111, also for Amir Khan.

What this means to boxing– Hopefully, Khan moves on to the winner of Bradley-Alexander, but Khan has mentioned a desire to avenge his loss to Breidis Prescott. Maidana, in a noble, losing effort still remains very relevant in the 140 lb. division, but may find it hard to get the fights he needs to move back into the championship picture.

Recap– This fight seemed to be Ortiz’s to take. He was the quicker, stronger, and bigger of the two, but allowed Peterson to get back into the contest in the second half of the bout. Despite building a solid lead by dropping Peterson twice in the third round, Ortiz would let Peterson back into the contest and make it a tight affair right up until the very end. The judges’ scorecards were divided: 94-94, 94-94, and 95-93 for Peterson. The Boxing Tribune scored the fight 95-93 in favor of Ortiz.

Recap– Agbeko flipped the switch in this bout, coming out as a quick, sharp counter-puncher, and cruising to a solid unanimous decision. Perez had his moments, including a scintillating sixth round, but Agbeko controlled the great majority of the contest and put on an outstanding performance. The judges’ scorecards were all in favor of “King kong” Agbeko: 116-112, 117-111, 115-113 . The Boxing Tribune also scored the bout 117-111 for Agbeko.

What this means to boxing– Agbeko moves on to face Abner Mares in the bantamweight tourney finals; Perez will take on Vic Darchinyan in the tournament’s consolation bout.

Recap– Mares’ solid fundamentals and athleticism carried him through this entertaining clash in Showtime’s bantamweight tournament. Darchinyan’s aggression never seemed to get on-track as Mares countered well and, despite suffering a deep, bloody gash in his hairline caused by a headbutt in the first, never lost his head in dealing with his awkward rival. Darchinyan would drop Mares with a sharp counter in the second round, and a point would be taken from Mares in the fourth for low blows. On the other side, Darchinyan would be ruled down in the seventh despite it being more of a slip than a  legit knockdown. The judges’ scorecards were divided: 115-112  and 115-111 for Mares, 115-111 for Darchinyan.  The Boxing Tribune scored the fight 115-111 in favor of Abner Mares.