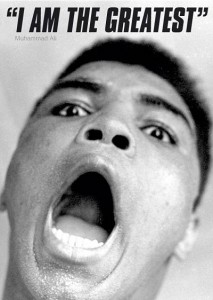 Very good weekend of boxing….the kind of stuff we have every right to expect each week of the year. It’s hard to rant when you’ve got a belly full of satisfying action, but here’s a rapid fire list of short rants to hold us over until next week…

Rant #1: While the winner of Bradley-Alexander on January 29th will have every right to assume the #1 spot in the jr. welterweight division, Amir Khan sure made a case for himself as the most talented 140 pounder. Bradley may be tougher, Alexander is more skilled, Maidana and Ortiz have heavier hands…But Khan is the best overall talent in the division.

Rant #2: What we saw last night in the Khan-Maidana encounter was Joe Cortez in “I’m going to the Hall of Fame, look at how I take control” mode. One of my biggest gripes with Cortez is that he always has to be the star of the show…”Look at me…Fair but Firm…” His long, unnecessarily indulgent separations of the fighters were definitely to Khan’s benefit, although I don’t think it was a real factor in the fight.

Rant #3: Nathan Cleverly had a legitimately tough time with a very inferior Nadjib Mohammedi on Saturday in a bout for the WBO interim light heavyweight title. Yes, I know that Mohammedi was a last minute replacement and, yes, Cleverly is a 23 year old “work in progress,” but Cleverly is going to suffer the fate of many Frank Warren fighters. So protected and isolated, they never reach their full potentials and wither on the vine.

If Cleverly is ever going to reach his potential as a real player at 175, he needs to either get to the US or encourage Warren to open the pocket book and bring in a better level of opposition than what’s available to him in Europe.

Compare Cleverly to a guy like Abner Mares, who is about the same age and has about the same professional experience. Mares is a professional talent, seasoned and well-rounded. Cleverly is still very much a work in progress. Unfortunately, Cleverly is now the WBO interim champ and a top 10 guy in all the rankings. He has no time to be a work in progress, he has to step it up now if he wants to be more than just a regional champ wearing a world title belt.

Rant #4: As first brought to our attention by boxing scribe and member of our forum, Tim Harrison of OfficialScoreCard.com, and later mentioned by Chris Milton in his “Weekly Weigh-in,” the WBO seems to be contradicting itself when it comes to the way they enforce their rules and regulations.

The WBO forced Sergio Martinez to vacate his jr. middleweight title under this pretense when he won the middleweight crown.

It has now been about a month since WBO welterweight champ, Manny Pacquiao, won the vacant WBC jr. middleweight title against Antonio Margarito….yet not a peep from the WBO or the “legit” mainstream boxing media…

It’s sad that guys like Harrison, who is doing this work as a labor of love, have to bring these things up while the paid and self-important boxing media are still washing their grills from tailgating at Cowboys’ Stadium.

Rant #5: Forget the crazy No Contest against Said Ouali on Friday, Randall Bailey has one of the best straight right hands in boxing. Southpaws would do well to stay far away from Bailey.

Rant #6: As a spiritually-rich, monetarily-poor boxing scribe, the idea of spending large sums of money seems like the stuff of fantasy. But, if one day I came across a seven-figure windfall and several similar paydays , it seems crazy to think that I could be broke within 10 years of my money grab.

A lot is said about fighters’ purses and all the hands that dip into that money before the fighter actually sees any of it, but if these guys had the common sense to live reasonable lifestyles, they would have no problem keeping their money until old age.

If you know that your money-making prime is usually less than a decade and there’s always the chance that each check will be your last, it makes no sense to live like some crazy pugilistic Sultan.

A modest 400K house in a nice neighborhood, two nice cars…all paid for in cash…And every subsequent paycheck goes to the retirement fund and normal living expenses. Seems simple. And don’t bring up the crap about growing up poor and not knowing how to handle money. I grew up poor and never had more than 20 bucks in my pocket at any time until I was in my early 20’s.

No, it’s not about growing up in “the hood,” it’s about being dumb and, often, it’s about trusting the wrong people to do a job that you could easily do yourself.

Ok…Until next week…In the meantime, Keep your eye on those who control the sources of information…Think critically…And, above all, use your common sense.