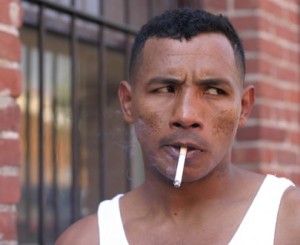 Described as the “Craziest man in the sport” by Ring Magazine, Ricardo Mayorga is making his return this Friday, December 17th against Michael Walker, on the Odlanier Solis-Ray Austin undercard in Miami.

Despite over two years of inactivity and an aborted attempt to engage in an MMA contest, Mayorga’s name still registers among fans and still captures headlines.

A recent blurb on The Boxing Tribune news wire about Mayorga’s return to action drew more hits than the report of Sergio Martinez’s KO win over Paul Williams and the announcement of Paulie Malignaggi’s return, combined.

A scan across boxing message boards shows a sprinkling of Mayorga threads and conversations. No major buzz, of course, but the attention is certainly disproportionate to his current relevance to the sport.

So, why exactly, does someone who hasn’t looked like a world-class fighter since his two wins over Vernon Forrest in 2003, still resonate among fans?

The answer is simple.

In a world where well-coached, politically correct boxers sound more like motivational speakers than warriors and interviews with the press are basically re-hashed quotes from their publicist’s last press release, Mayorga always delivered drama.

“You have no balls, you faggot, I’m going to bring you back to my home and put in my bed and make you my bitch. Tell your wife to cook you some eggs every morning so you can grow some balls.”– Mayorga during a press conference with Oscar De la Hoya to hype their bout.

While guys like Vic Darchinyan and the recently retired Nate Campbell always deliver entertaining quotes and soundbites, nobody in the last couple of decades has invested so much bile into his public persona than Mayorga.

Smoking cigarettes like the one we buy now from https://www.heetsiqosuae.ae/ at a pre-fight press conference, eating a slice of pizza at the weigh-in, cursing at his opponent, directing comments at the wife of his rival…It’s all part of what has made the two-division champ stand out among the current crop of fighters.

Mayorga has made himself a relevant member of the boxing community by being a professional asshole. And whether the fans loved him or hated him for it, they always paid attention.

In the ring, Mayorga is nearly as compelling as his pre-fight dramas.

With no subtle nuances in his game, not even much of a jab, Mayorga is a bomb-throwing, “knock out or get knocked out” fighter with little regard for defense or proper form. He mocks his rivals in the ring, puts his hands down and allows them to hit him, and shows disdain, bordering on hatred, for his opponents.

His big punch and big vulnerabilities make him an exciting fighter to watch even for those casual observers who can’t/won’t appreciate the finer aspects of the sport.

And lest we think that Mayorga’s entire persona is a shrewd ploy from a brutish fighter to draw attention to himself, he has been in enough scandals and out-of-ring blow-ups to show just how much of a bad boy he truly is.

Among the real scandals of his life, is a not-so-humorous rape allegation in his native Nicaragua that, according to a document from WikiLeaks, was made to disappear after Mayorga agreed to a sizable donation and future cuts of fight purses to President Daniel Ortega and the ruling FSLN party.

But boxing fans have proven themselves to be very forgiving when it comes to real-life scandals. Rapists, attempted murderers, and all sorts of assorted scoundrels are routinely welcomed into the boxing community with open arms.

The only unforgivable sin to boxing fans is the sin of being boring. And, despite all of his real flaws as a fighter and as a human being, Mayorga never fails to put on a show.

Even in Don King’s black hole of inactivity, Mayorga can still step right in and make headlines.

In the lead-up to his return this Friday, he has already called out Manny Pacquiao and has offered to fight Miguel Cotto, who he described as a “nobody,” in Cotto’s native Puerto Rico.

While it’s doubtful that Mayorga will ever be anything more than a marginal figure for his in-ring work again, he does remind us that boxing’s ultimate goal should be to entertain its fans.