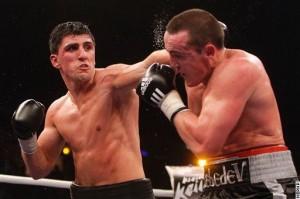 Recap– Challenger, Lebedev, made a solid run at WBO cruiserweight champion, Marco Huck’s title, but spent too much time stalking and allowed Huck to steal enough rounds to retain his title. Judges’ scorecards were: 115-113, 115-113 for Huck and 116-112 for Lebedev. The Boxing Tribune scored the fight 114-114, a draw.

Recap– Morales struggled at points with the awkward southpaw late-replacement, Lorenzo. Morales would drop Lorenzo in the fifth, but the contest would seem to be fairly close in the second half of the fight. Judges’ cards read: 116-111, 115-112, 114-113.

What this means to boxing– Rumor has it that Morales struggle mightily to make weight, but the win puts him in line for a possible bout with Juan Manuel Marquez in 2011.

Recap– The Colombian, Ramos, was game, but deeply overmatched. Arce would send Ramos to the canvas with straight right hand in the middle of the first and then pounce on the his rival until the ref waved the fight at the 2:06 mark.

What this means to boxing– After the bout, Arce said that a bout with WBO jr. featherweight champ, Wilfredo Vazquez Jr., was signed and scheduled to take place in April.