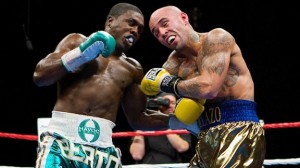 The welterweight division still boasts boxing’s two best fighters in Manny Pacquiao and Floyd Mayweather as well as a pretty serviceable, if slightly unproven, Andre Berto as a third wheel. But below them, other than a 39-year old Shane Mosley, already sporting a one-sided loss to Mayweather and scheduled to face Pacquiao on May 7th, the division is almost completely frozen with little cause for optimism on the horizon.

Back in 2006, the welterweight division, one of boxing’s historical glamor divisions, was stacked and primed to be on its way to a golden era.

Zab Judah had just lost to the Cinderalla story of Carlos Baldomir, but remained the most talented 147 pounder. Antonio Margarito, Paul Williams, and Joshua Clottey were starting to emerge as legitimate threats. Floyd Mayweather had just moved up from 140 lbs. with Miguel Cotto officially joining the division several months later. Even Shane Mosley, who had been campaigning at 154, eventually re-enlisted for a taste of the action. The division also boasted talents like Luis Collazo, Carlos Quintana, and Kermit Cintron.

The possibilities seemed endless and the fans, rightfully, expected an era of classic welterweight wars.

Now, four years later, one can’t help but look back at the Class of 2006 as one of the sport’s most frustrating recent failures. Some quality bouts were made and some legitimate encounters served to hold the public’s interest, but with the surplus of talent available, it just wasn’t enough.

Boxing politics blocked some of the best bouts from being made while the shadow of plaster-laced hand wraps cast a doubt on a few of the big bouts that did take place.

And then, of course, a certain Filipino sensation moved into the neighborhood, knocked off a couple of the big names and parlayed that success into a business stranglehold on the welterweight division.

Now, a look up and down the 147 lb. class will reveal a division absolutely drained of top talent with not much to look forward to at all.

Andre Berto is firmly in place to be the next generation’s top welter, but with Manny Pacquiao playing Big Top exhibitions around the losers’ bracket and Floyd Mayweather sparring with security guards and baby’s mamas, there’s not much of a chance of either graciously offering to pass the torch. Aside from the big two, Cotto and Margarito are now at 154 with Judah back down to 140 and Clottey floating in limbo.

So, what we have is a talented fighter in his physical prime with, essentially, nobody to fight and no way to affirm or deny his status as heir apparent to the 147 lb. throne.

Below Berto, the closest the division has to blue chippers are a pair of talented, but totally unproven, prospects: Philadelphia’s Mike Jones and the UK’s Kell Brook.

Jones, at 27, is hardly a young prospect who can afford to learn on the job. Most recently, Jones struggled to a controversial majority decision win over second-tier challenger, Jesus Soto Karass and is scheduled to fight a rematch of that bout in February. While Jones is currently the top American welterweight prospect, his performances have been unspectacular and uneven since moving up in class from the club circuit.

The 24-year old Brook is more physically gifted than Jones and certainly appears to have the talent to compete at the top, but has yet to fight anyone even remotely close to world class level. At this point and until he steps up in class, there are more questions than answers when it comes to Kell Brook.

Stepping away from Jones and Brook, the division is basically divided into two categories: Second-tier, marginally talented foreign-based fringe contenders and veteran 140 lb. re-treads moving up to exploit a weak welterweight class.

The former group boasts names such as Jan Zaveck, Viacheslav Senchenko, Selcuk Aydin, Rafal Jackiewicz, Delvin Rodriguez, and Matthew Hatton. There are some competitive bouts to be made from these names, but none will produce much interest outside of they’re respective countries and, obviously, the possibility of producing an era-defining blockbuster from that group is slim.

Among the former jr. welterweight players to move up, the names are more recognizable, but not any more likely to make an impact. Paulie Malignaggi, Randall Bailey, Junior Witter, and Souleymane M’baye are all former titlists at 140, but unlikely to make any real headlines at 147.

Outsiders like Soto Karass, Sebastian Lujan, Said Ouali, and Alfonso Gomez can provide some filler material, but none are exactly prime time players either.

Really, there isn’t much difference in quality from the #4 ranked welterweight right down to the #20 slot. This kind of parity is usually good for the overall health of a division, but when it comes down to one of boxing’s glamor divisions in an era without a dominant heavyweight class, this is only bad news for the sport.

WBA jr. welterweight champ, Amir Khan, will likely outgrow 140 before he runs out of opponents and offers some optimism for the future, but only if Pacquiao or Mayweather are there to meet him. Otherwise, Khan will be in the same boat as Berto and of anyone else who can’t make a deal with Top Rank for a Pacquiao fight or convince Mayweather to make another cash grab.

Saul Alvarez is another much-hyped prospect who, despite recent fights at the 154 limit, insists that he will come down to conquer 147. “El Canelo” is a solid prospect with a strong fan base, but at 20 years of age, nothing is for sure.

In a lot of ways, the situation at 147 right now can be seen as a microcosm for everything wrong with the 2010 version of professional boxing.

Bogged down in politics and greed, the narrative of the sport has been frozen and the inmates are now running the asylum with little regard for anything more than stroking their own massive egos.

But the saving grace of boxing is that it only takes one guy, one professional with true respect for the sport, to turn things around. The questions are: Who? and How long will we have to wait?