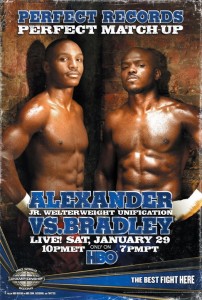 The real fear of having a near-empty Pontiac Silverdome for the first major fight of 2011 has sent promoters Gary Shaw and Don King scrambling for pieces to plug up the gaps in the Timothy Bradley-Devon Alexander undercard this Saturday.

As previously announced, veteran showman and winner of Friday Night Fights’ Most Memorable Boxer poll, Emanuel Augustus (38-33-6, 20 KOs) will fill in for the injured Tim Coleman against local area prospect, Vernon Paris (23-0, 14 KOs) as the chief support to the main event.

Recently added to the undercard, is an interesting encounter between undefeated welterweight prospect, James De la Rosa (20-0, 12 KOs) and veteran fringe contender, Germaine Sanders (27-8, 17 KO’s). De la Rosa, once considered a top prospect at 147, has been inactive for about 15 months while Sanders, despite dropping his last 5, has been competitive in those bouts against a high level of opposition (Randall Bailey, Eromosele Albert, Mike Jones, Jesus Soto Karass, Shamone Alvarez).

Rounding out the card, and just added recently, is a battle of two marginal heavyweight prospects as Canada’s Bermane Stiverne (19-1-1, 18 KOs) takes on undefeated Kertson Manswell (20-0, 15 KOs) from Trinidad And Tobago.

The Timothy Bradley-Devon Alexander main event will be televised by HBO on Saturday, January 29th at 10 pm Eastern Time.