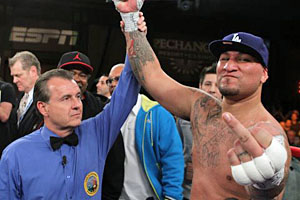 After a half-round of feeling out, a huge right hand from Arreola staggered Abell and caused the referee to step in and stop the contest, but not before Arreola delivered a good-bye kiss to Abell’s cheek.

The Boxing Tribune’s Story Behind the Story: Arreola did look sharp and did look quicker, but we can only draw so much from two minutes and eighteen seconds of a bout that was designed to be one-sided. The real test for Arreola will be in the 4-6 weeks following this fight where the temptation will be to let up, relax, and slip into his usual bad habits. New trainer, Ronnie Shields, should keep Arreola fighting frequently to stay sharp and relatively lean.

Despite an ugly cut over his left eye, caused by an unintentional clash of heads, Lopez stalked and eventually wore down the quick-fisted Dallas.

The Boxing Tribune’s Story Behind the Story: Add another name to the already-stacked 140 lb. class. Josesito Lopez would be a long-shot to be competitive against the top three or four names in the division, but Lopez appears to be a man re-born and will give a good account of himself against anyone. He has fought a very good level of opposition throughout his career and is becoming an example of a battle-hardened fighter in contrast to Dallas, who had been fed many soft touches and just wasn’t tough or experienced enough to go to war when the time came.

Four Points Sheraton Hotel in San Diego, CA– Raul Hirales Jr. (12-0, 7 KOs) made Friday night all about him as he out-hustled and out-muscled the talented, but inconsistent Charles Huerta (16-2, 9 KOs) to take a split decision in a featherweight contest.

Hirales had a point deducted from him in the fifth round, but other than that, it was smooth sailing throughout. While it was obvious that Huerta was probably the more talented of the two, it was Hirales who fought the hardest and did the most damage.

The Boxing Tribune Story Behind the Story: Hirales, at 26-years of age, fought like a fighter realizing that his prime is now. Huerta, at 24, fought like a kid with no real urgency. Both have the ability to make an impact at 122-126, but it appears as though only Hirales really wants it.

The Boxing Tribune Story Behind the Story: Despite having lost five of his last seven, Viloria represented a step up in class for Russell and the young southpaw adjusted his game appropriately. Russell is obviously talented, but still fights like an amateur with an amateur mind set. He needs a lot more seasoning before being tossed in with a very tough featherweight class. At 22-years of age, there is plenty of time to bring him up properly.