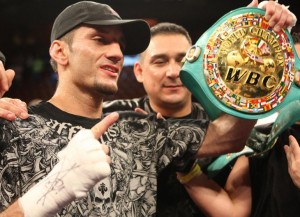 The best of wishes to Emanuel Augustus. I hope he realizes just how much hardcore fans love and respect everything he has done for the game. I also hope he realizes now that he’s retired and he is far less likely to get robbed.

So HBO killed off any chance of Alexander v Bradley being a good fight by anointing it this generation’s Hearns v Leonard. Thanks for that.

Victor Ortiz started it, Anthony Peterson joined in, and now Devon Alexander has made it a unholy Trinity of young American fighters who have found a way to quit.

Rumour in the UK has it that Amir Khan will defend his WBA trinket against Junior Witter. Should he win, he will go straight to a matchup with Tim Bradley, which would crown an undisputed 140lb champ.

Last weekend may have ended up being a huge letdown, but 2011 could be the best year we have had in many a year. Now I know we said that in 2010, but Boxing fans are eternal optimists.

Ivan Calderon-Giovanni Segura 2 looks like its a done deal. Fantastic.

There has been a whole lot of hoopla created by Top Rank moving the Pacqiuao v Mosley PPV to Showtime. As a Boxing fan I can not help but be happy. The PPV will generate a stupid amount of money for Showtime which they will hopefully invest into its Boxing program. Over the past few years, Showtime has consistently offered us high quality fights. Imagine what they will do with more money.

Carl Froch v Glen Johnson could be heading to Detroit. Why? The fight makes no sense being in Detroit. Unless it is a co-feature with Abraham v Ward, it makes very little sense being held anywhere outside of England.

Sergio Mora returns on ESPN2 this Friday night and takes on Brian Vera in what should be an entertaining fight. You have to feel sorry for Mora, once again he has been shunted to one side while his last dance partner (Shane Mosley) has moved onto a fight with Manny Pacqiauo.

Olympic Heavyweight bronze medalist David Price takes on Osborne Machimana in what should be his last “welcome to boxing” bout. When you look at James Degale and what he has achieved since the same Olympics, the other UK Olympians pale in comparison.

The biggest fight this weekend is between Tomas Rojas and Nobou Nashiro for the WBC trinket Rojas holds. It will be worth keeping an eye out for this one. Neither of these guys will ever make a P4P list, but its very rare either of them is in a bad fight.