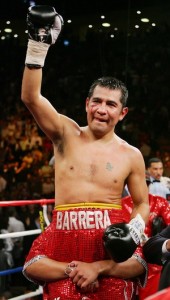 Legendary Mexican fighter and future Hall of Famer, Marco Antonio Barrera (66-7, 43 KOs), will be back in action this coming Saturday in Guadalajara, Jalisco, Mexico on the same card that will see Julio Cesar Miranda (34-5-1, 27 KOs) defend his WBO flyweight title against Filipino, Arden Diale (14-5-3, 3 KOs).

Barrera is 3-1 in his comeback attempt, following his 2007 rematch loss to Manny Pacquiao. The only loss in his return was against Amir Khan via technical decision in Manchester, UK, when an accidental clash of heads forced the referee to stop the contest in the fifth. Barrera’s other three comeback bouts have been against a marginal level of opposition.

Barrera’s opponent is still officially listed as TBA for Saturday’s bout, however, The Boxing Tribune has learned that the opponent, provided he makes the commission grade, will be Jose Arias (15-1, 9 KOs) of the Dominican Republic, by way of Providence, Rhode Island and, most recently, Costa Rica.

Despite Arias’ impressive-looking record, the 43-year old Arias has faced a very weak level of opposition and had been retired for over a decade before making his return in 2010.

Fighting seven times (all four-rounders) in 2010, Arias’ opponents in that span of time have a combined record of 27-64-8.

There is also some speculation as to Arias’ ability to pass a standard US physical examination, thus the reason that all of the contests since his return have been in Costa Rica.

Barrera is no stranger to controversy in terms of booking opposition since he made his comeback in late 2008. An ugly incident, originally reported by this writer and submitted to Boxingscene.com, reports an alleged attempt to fix a fight between Barrera’s management and the management of a potential opponent.

Barrera hopes to use this jr. welterweight bout as a tune-up for a return match against Amir Khan or a run at a title at either 135 or 140.