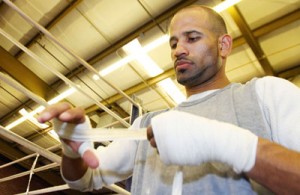 In a rematch of a 2005 one-sided unanimous decision loss, 35-year old Puerto Rican former world flyweight champ, Eric Morel (43-2, 21 KOs), will continue his quest for a shot at a bantamweight title against veteran Mexican former title holder, Martin Castillo (35-4, 18 KOs), on April 1st at a venue TBD. In their first bout, Castillo successfully defended his WBA super flyweight title, winning every round but one on all three judges’ scorecards.

Castillo was last seen in July of last year (his only fight of 2010) when he was blown out in one round by Jorge Arce in a jr. featherweight bout.