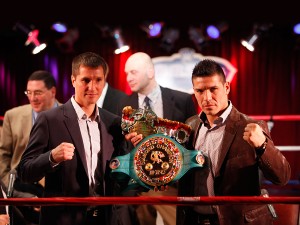 The editorial staff of The Boxing Tribune can by no means be considered “Trekkies,” but the best analogy for this Saturday’s Martinez vs. Dzinziruk contest is “Kirk vs. Spock.”

Martinez takes the fight where he sees it going. While able to box from the outside and play it safe, he’s more than willing to go to war when he feels the time is right. At times, he can be lured into taking risks beyond those that are absolutely necessary, but his southpaw stance and athleticism work to bail him out of tough situations.

In contrast, The Ukraine’s Sergiy Dzinziruk is controlled and steady. Working behind a high guard and a fundamentally impeccable defense, Dzinziruk will give ground in order to get better angles and opportunities to counter. Supremely patient, he will wait for the right moment and score with precise, well placed scoring shots. He’s rarely frazzled and, while Martinez wears his heart on his sleeves, Dzinziruk will remain cool and collected throughout.

Martinez’s improvisation skills will have to come into play and the degree of his success will depend on how much he’s able to draw Dzinziruk out of his tightly-wound game plan.

Dzinziruk hasn’t fought above the jr. middleweight limit in over 7 years and that may be a factor, but the bigger thing to look for is how well Martinez is allowed to dictate the pace of the bout.

If this turns into anything other than a tactical boxing match, it will be to Martinez’s credit, but whereas Martinez can fight at various speeds and rhythms, Dzinziruk only knows one way to fight. That should be the difference in this contest. 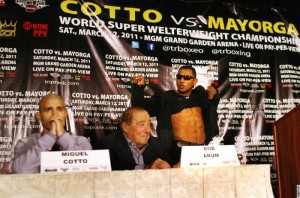 Many feel that Puerto Rico’s Miguel Cotto (35-2, 28 KOs) is a fighter who is psychologically shot. After his brutal beating at the hands of Antonio Margarito, Cotto put in an uneven performance against Joshua Clottey and then a complete collapse against Manny Pacquiao, showing an inability to stay in the pocket in both fights and often resorting to a full retreat as a way to deal with sustained offensive surges.

In Nicaragua’s Ricardo Mayorga (29-7-1, 23 KOs), Cotto will find an opponent with only offense and one who has lived his career with a kill or be killed philosophy.

Consider this contest a “Cotto-Margarito” on “easy” mode. Mayorga will push forward and Cotto will have to resist the urge to fall back in retreat. Mayorga is only dangerous when he has room to throw his wide punches, but is especially deadly when he’s allowed to bully and intimidate his opponent.

On paper, Cotto is clearly the better fighter, but a lot of questions remain about Cotto’s ability to pick up the pieces and thrive, especially against an all-offense fighter. A solid win over Yuri Foreman, some much-needed time off, and the addition of Emanuel Steward certainly serve to Cotto’s benefit, but we’ll only know to what degree when the fight starts.

Cotto doesn’t have the kind of one-punch power to keep his opponent really honest, so he’ll have to box, use angles, and eventually grind Mayorga down. But all of this depends on Cotto’s resolve to stay in the pocket against his rock-throwing rival. If Cotto can do this, it’ll be a walk in the park. If he can’t, it’s the end of the line for the three-division world champ.

Vazquez, despite being trained by the infamous Javier Capetillo, is boxer who uses movement, angles, and smart counter-punching. Zappavigna is gifted with one-punch power and, while lacking in some of the finer points of prize fighting, makes up for his lack of pedigree with pure aggression.

The keys to victory are easy here. Vazquez needs to box while Zappavigna needs to turn it into a brawl.

Vazquez’s better resume and his poise in the ring suggest an ability to fend of an aggressive puncher. Zappavigna has never been in against an opponent as good as Vazquez and, unless he can land one big fight-ending bomb at some point, will likely be a step behind the whole night.