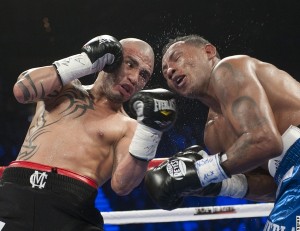 Welcome to Magno’s Monday Rant, the boxing column that so desperately wanted to tie in with the latest Charlie Sheen fad.

–Make no mistake about it, boxing is a vast wasteland of fakes, phonies, crooks, and cronies…Guys who are looking to prey on the good nature of athletes who, literally, risk their lives to make a better life for themselves and their families. Step away from management-types and you’ll find things not much better among the media, where 90% of the guys you run into are either on the take or looking for a way to be on the take. And let’s not even talk about their throbbing self-importance– Some media-types have such an ego that you’d think they were the ones in the ring taking the shots.

But step away from all the characters around the sport and you get to the fighter…These are the only guys worth dealing with in the sport and the only ones who really know what hard work and sacrifice is.

And sometimes we forget this.

So, when one regularly writes about boxing, it’s tough not to get bogged down in the muck of all the sleazy stuff that goes on around the sport.

Sergio Martinez, with a flashy and dominating performance against a tough Sergiy Dzinziruk, put on the type of show to be expected from a real star. Martinez is the kind of fighter you have to watch and, just off the basis of his own ability, makes for an entertaining bout no matter the opponent. Like Roy Jones against guys such as Bryant Brannon and Tony Thornton, even the thrill of a virtuoso one-sided performance is more than worth the price of admission. As testament to this star power, Martinez had the Foxwoods Resort Casino in Mashantucket, Connecticut rocking against a guy who would have trouble being recognized in his own gym.

Meanwhile in Vegas, Miguel Cotto showed class and supreme professionalism in the face of a guy who baited and antagonized him for weeks. It takes years of hard work and dedication to fight with the skill of a Miguel Cotto and, while some would argue that he never got as good as he potentially could have, there are few fighters out there who can execute their craft at this level.

I’ve said before that Cotto has been done, psychologically, since the Margarito fight and I stand by that assessment, but that doesn’t mean Cotto can’t still fight at a high enough level to beat 90% of the fighters in his weight class. The test for Top Rank will be to either find that beatable 10% and let Cotto go out with dignity or to do what usually gets done to loyal, company men in boxing who stick around too long– wring him of every last drop of mojo and then feed him to a younger prospect. The proposal of Margarito-Cotto II gives us an idea of Arum’s likely strategy. We’re probably going to see Cotto and Margarito beat each other up again, with the winner being fed to Vanes Martirosyan in 2012.

But, negativity aside, we saw two real pros Saturday and two guys who showed that there is as much class inside the ring as douche-baggery outside of it.

That’s something that I need to work on– reporting the good as often and as vociferously as the bad.

So, tying things back up with the admirably insane Mr. Sheen– What’s the answer to all the sleaziness that goes on around the sport? Duh, Boxing! As long as the fighters keep doing their job with dignity, class, and professionalism there’s still hope for the sport we love.

— Speaking of good, The Boxing Tribune has added a video section which we will be filling with original material as well as quality videos from other sources. Right now, we’re light on content, but we’ll be building the section up as a compliment to our growing universe and we’ll soon be at full speed.

— And on one last positive note, I’m one of the few people out there who seems to think so, but I see Odlanier Solis putting up a helluva scrap against Vitali Klitschko this coming Saturday. Vitali is nearing the end of his run and I think Solis is the best, most complete fighter he’s fought since Lennox Lewis. Solis has good balance and, unlike most heavyweights these days, actually throws combinations! I wouldn’t be surprised in the least if Solis pulled this off, grabbed the WBC strap, and suddenly made things a lot more interesting at heavyweight.

That’s all for this week…Don’t forget to bookmark The Boxing Tribune for the best in Independent News and Views from a website with ZERO conflicts of interest.

You can email Paul at paulmagno@theboxingtribune.com, follow him on Twitter at www.twitter.com/boxing BTBC and catch him at the local all-girls prep school, “just passing by” or tune into his “Pocket Fisherman” infomercial on late night TV. Paul is a full member of the Burger King Kid’s Club.