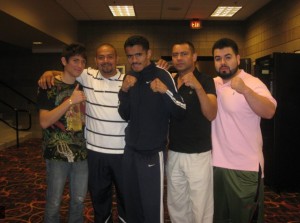 Miguel Vazquez impressed his team and the public with his solid performance against the hard hitting and always dangerous Leonardo Zappavigna.

Though Vazquez’ corner was ecstatic with their fighters performance, they were further impressed by his humble display of sportsmanship after the match.

He asked his trainer Javier Capetillo Jr. to accompany him to Zappavigna’s room to help him translate a personal message to the young challenger.

According to Javier, Vazquez told Leonardo that “the fight was very challenging due to his power and that he will surely become a world champion someday.”

After the press conference ended I walked with Team Vazquez and personally witnessed Zappavigna’s trainer tell Vazquez that “you are a true champion that shows class both inside and outside the ring.” Afterwards, Miguel thanked him and as he quietly walked off to his hotel room.

Vazquez behavior was reminiscent of the late great Alexis Arguello and truly stands out in an era in which sports news is full of toxic athletes that only care about themselves.