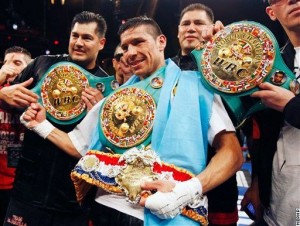 Some weekly awards after a big boxing weekend…

FIGHTER OF THE WEEK: SERGIO MARTINEZ

With all due respect to Miguel Cotto, this one is a no-brainer. Martinez (47-2-2, 26 KOs) completely controlled Sergiy Dzindziruk for the majority of the eight round fight and then put him away the second Dzindziruk appeared to be making a comeback. At the risk of raining on the parade a little bit however, it is worth saying that the hardcore boxing fans likely overrated Dzindziruk (37-1-0, 23 KOs) just a tad. It was one of those circumstances where it was an easy fight to overthink because of Dzindziruk’s style and the certain unknown quality that an undefeated but untested fighter always has. The bottom line though, is when a superstar is fighting a guy that most people haven’t heard of, the result is often much easier to predict than the experts want to make it. Martinez simply was too good, and had too much confidence coming off wins in huge fights. Dzindziruk has some ability, but was in way over his head against one of the world’s best.

As much as I had no desire to see this mismatch, and as much as I enjoyed Andy Lee’s dramatic comeback victory on the Martinez-Dzindziruk undercard, I must admit that Mayorga (29-8-1, 23 KOs) did what he usually does. He made a damn good fight, but got knocked out by a better fighter. While he never seemed to really bother Cotto as much as the Showtime broadcast team was giving him credit for, he did his best to force the action and earn his check. Cotto (36-2-0, 29 KOs) meanwhile, still appears to be a world class fighter, and can dominate guys the level of Mayorga all day long. He also was able to show that he isn’t afraid to get into a bit of a brawl, something that was in doubt after tough losses to Manny Pacquiao and Antonio Margarito. A rematch with Margarito appears to be on the horizon, expect Cotto to even the score.

STORY OF THE WEEK: COMPETITION IS GOOD FOR THE SPORT

As much as many in the boxing community saw the mini-feud brewing between Top Rank’s Bob Arum and HBO as a disaster for the sport, the first weekend of the showdown actually turned out great for both sides. Arum put on an interesting PPV card, and HBO had a top level world championship show. If Showtime continues to put out quality programming, HBO will be forced to step up its game to match. When the two networks have to fight over boxing viewers, the fans can only benefit.