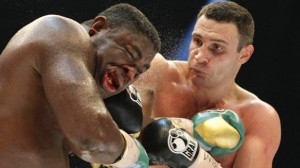 Many fans point to the relatively colorless Klitschko brothers, who dominate the top two spots in the division, as the reason for the malaise among the sport’s big men.

It could also be pointed out that the consensus #3 heavyweight, David Haye, most definitely not a colorless boxer, has opted to be a regional champ in the comfort of his native UK when he could be so much more.

Below the Klitschko brothers and Haye, the division is lacking in dominant talents and exciting performers. And, sadly, there doesn’t seem much on the horizon in terms of prospects or potential champions.

The American scene looks particularly grim, with the likes of Eddie Chambers, Tony Thompson, and Chris Arreola topping an especially dismal group of heavyweights with only marginal prospects, Seth Mitchell and Deontay Wilder, within sniffing distance of the US top 10.

Despite the boasting from across the pond, the Euro scene is not much better. With the exception of the Klitschkos and Haye, the rest of the Euro-class is basically just a collection of pampered, uninspiring fringe contenders.

Even an exciting, active fighter like Poland’s Tomasz Adamek, is not considered to be a serious threat for the reigning top fighters in the division.

The situation has become so drastic that guys like Michael Grant, Kevin McBride, and Frans Botha have decided to re-enter the mix while the 48-year old Evander Holyfield still continues to plug away without fear of being retired. And let’s not even talk about the fact that Tommy Morrison and Oliver McCall are still active heavyweights.

Whether the state of the division is caused by an inferior level of talent or by a xenophobic distaste for the decidedly dominant, but unspectacular Klitschkos, the overwhelming opinion is that the heavyweight class is going through one of its roughest patches.

The heavyweight division sure seems to have fallen into the realm of doom and gloom, but it’s not the first time the division has been less than inspiring in terms of overall talent and it’s certainly nothing that can’t be overcome with the right frame of mind and the correct strategy.

Obviously, we’d all love to have that one dominant heavyweight figure, like Mike Tyson or, at the very least, a half-dozen quality contenders who match up well, like in the mid to late-90’s when boxing’s glamor division boasted names like Holyfield, Lewis, Bowe, Moorer, Mercer, Tua, and Ibeabuchi.

The one positive regarding the current-day heavyweight division is that, below the top 3 in the division, there’s general parity throughout the weight class. And where there’s parity, there’s the potential for quality match-ups.The key to a division without fire is to somehow ignite it through quality matchmaking.

Why allow fighters to sit back, take on club fighters, and bide their time until they can get one big payday, in a one-sided loss, against one of the Klitschko brothers?

Contenders would be more willing to actually fight other contenders if the money was there. Believe it or not, the interest is there for high-paying, non-championship fights. Fighters like Chris Arreola get good ratings and the heavyweights still get higher numbers than similarly-booked matches at lower weight classes. It’s almost as though fans want to believe and will check in every once in awhile in hopes of finding something special.

It’s not in any promoter’s best interest to have a flaccid heavyweight division. And it doesn’t really matter whether the fighters have a chance at beating one of the Klitschkos– Fans want quality and they’ll keep tuning in for as long as the bouts feel well-matched and competitive.

A tournament to name the next American heavyweight star would provide for a couple of years of intrigue and could, possibly, even crown a legitimately dominant heavyweight. Paydays would be good enough to keep the fighters interested and a quality, well-booked tourney could find a solid home somewhere on TV or via PPV.

You could expand the tournament idea into the international realm, creating competitive non-title bouts to go alongside the Klitschko’s dominant wins.

It would even be possible to hold a couple of tourneys at once, maybe one at the highest level and one among the division’s second or third-tier fighters. The only roadblock could be the fighters’ management, and even that could be overcome with the promise of a series of solid paydays and the potential for a whole lot more.

Yes, it’s a bit optimistic to assume that boxing and it’s power brokers could get together to make such a thing happen, as logical and as mutually beneficial as it would be. But even in the absence of tournament-like structure, the key to making the division relevant again is in the matchmaking.

It may not be a golden age of fight action, but Hasim Rahman-Chris Arreola, Tomasz Adamek-Alexander Povetkin, Samuel Peter-David Tua, and Eddie Chambers-Denis Boystov would all be competitive fights contested at roughly the same talent level. And there are other fights that could be made, fights that could produce enough excitement to carry the division through a less-than-stellar era.

The question is whether anyone wants the hassle of trying to make these fights happen or if, as is usually the case these days, the fighters and their management are just content with taking the quick pay out while leaving the real money on the table.