Berto, who has been widely criticized for the overall quality of his opposition, is looking to make the sixth 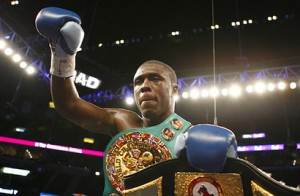 defense of the title he won by beating Miguel Angel Rodriguez in 2008. During his reign, Berto has taken on Luis Collazo and Carlos Quintana, but has also faced the likes of Freddy Hernandez and converted jr. welterweights, Juan Urango and Stevie Forbes.

Ortiz has campaigned mostly in the jr. welterweight division, but has had several brief runs at 147. The 24-year old Oxnard, California resident is on a 4-0-1 run after his shocking TKO 6 loss to Marcos Maidana in 2009. In his last fight, Ortiz scored a lackluster draw against Lamont Peterson.

Andre Berto-Victor Ortiz will be telecast on HBO with the tape delayed Amir Khan-Paul McCloskey contest serving as the televised undercard.

Berto’s #1 challenger, Selcuk Aydin, as well as light heavyweight, Zsolt Erdei and jr, middleweight, Deandre Latimore are scheduled to be featured on the live undercard.