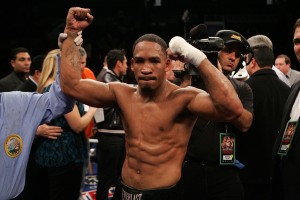 In the first, the heavy favorite, Kirkland, even found himself momentarily buzzed by a Berrio counter right hand.

However, in the second, Berrio appeared to be looking for a way out and seemingly found it in a flurry of Kirkland punches that were relatively glancing shots. Whatever, Berrio stayed down for the full count.

As is often the case with Hopkins, he had the ability, but lacked the fire to beat am obviously hungrier Solomon. The judges’ scorecards reflected the true outcome: 97-93, 99-91, 99-91, all in favor of Solomon. The Boxing Tribune also scored the bout 99-91 for Solomon.