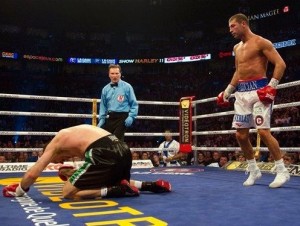 Welcome to another edition of Magno’s Monday Rant, the Charles Bukowski boxing column in a world of star-struck, social-climbing shills.

Saturday was my birthday, but more importantly, it marked my annual journey outside the boundaries of my cement bunker in the hills of Central Mexico and into the lovely and fertile colonial college city of Morelia where everything goes and yours truly engages in a 48-hour binge of carnal and self-indulgent delights very unfitting of a good Buddhist such as myself. But, hell, this used to be every weekend…and, yeah, I subscribe to the theory that a man needs to be a beast every once in awhile.

Upon my return to the security of the home base, I had a nice “to do” list of downloaded fights to watch. It wasn’t a great weekend for the sport by any stretch of the imagination, but there was a lot happening and, in the absence of a major fight on US networks, there was more than enough action to keep us hardcore fans occupied.

Guillermo Rigondeaux showed that he is self-aware enough to respond to criticisms with action and improvement.

After a dull performance (and near loss) last time out against Ricardo Cordoba, the Cuban amateur star lit into Irish challenger, Willie Casey, in Casey’s own back yard and put him away in the first round.

You can attribute the quick TKO to Casey being an inferior fighter with no world class experience whatsoever, but Rigondeaux still could easily have carried his opponent for 12 easy rounds. Instead, he saw that every punch landed hurt his opponent and he went for the kill. The result was 158 exciting seconds and a devastating win in hostile territory.

Klitschko-Solis was bad all around. Solis’ early departure put a premature end to a contest that was proving to be an intriguing encounter and it may have ended the chance of there being a third premium cable channel in the fight game.

It was the absolute worst debut fight for Epix, the upstart premium cable outlet looking to get into the boxing biz. With Solis going down from a glancing blow up high on the head and hurting his knee on the way down (yes, that’s my take), the 2 minutes and 59 seconds of the contest was hardly worth the channel’s investment and had enough stink on it to discourage future involvement. Also, according to many fans who tried to access the Epix internet stream, there were major problems with the cyber side of the broadcast as well. Just the slight detail of not being able to access the stream until after the fight already finished…nothing major.

Despite a second round KO of Jhonn Berrio, Kirkland looked extremely vulnerable in the first and provoked more than a few raised eyebrows when he actually got buzzed by the Colombian journeyman with a counter right hand late in the round.

Could this be a case of new trainer Kenny Adams tempering the beast by trying to introduce technique to the Kirkland equation? Guys like Kirkland work off instinct and hunger. They tend to need someone who will keep them in shape, keep them hungry, and then just stand back to unleash the fury. Adams is a good trainer, but he may be trying to add training wheels to Evel Knievel’s chopper.

Maybe I’m off base and this was merely a case of Kirkland shaking off ring rust in only his second fight back from two years of inactivity. When he steps up the class of his opposition, we’ll find out for sure, but I get the sneaky suspicion that the “Mandingo Warrior” will be matched up very carefully for his next several fights, unless management wants to dive in for a major pay day before he can screw up and get incarcerated again.

Forget the criticisms and attacks, Lucian Bute is a world class talent and deserves to be regarded as such.

Dismantling Brian Magee is no world-crushing feat, but Bute’s skill level is obvious– as is the fact that he’s fought pretty much every top-ranked super middleweight not tied-into the Super Six tournament.

The guy is really good and his body attack is to be admired, especially in a boxing world that has become focused on the head shot.

People need to stop with the “Bute fights bums” baloney. With six of the top seven super middleweights signed to the Super Six tournament for the last year and a half, and considering the fact that Bute has already beaten Librado Andrade and Sakio Bika, who else, exactly, is Bute supposed to fight? Looking at The Boxing Tribune Super Middleweight Rankings, of the Top 12 168-pounders in the world, only two (Robert Stieglitz and John Paul Mendy) are not in the Super Six, injured, or a previous victim of Bute.

The IBF 168 lb. champ has proven to be among the best and he has now verbally committed himself to Mikkel Kessler and the winner of the Super Six next. What else do you want?

See ya next week…

You can email Paul at paulmagno@theboxingtribune.com, follow him on Twitter at www.twitter.com/boxing BTBC or tune into his “I Love the Golden Girls” tribute podcast. Paul is a full member of the Burger King Kid’s Club.