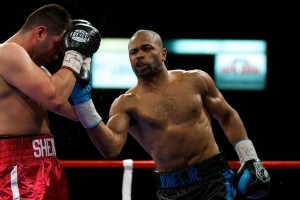 In a fight that some are labeling a suicide mission, former four-division champ, Roy Jones Jr. (54-7, 40 KOs) has decided to once again step into the ring, this time in Moscow, May 22nd against top-ranked Russian, Denis Lebedev (21-1, 16 KOs) in a cruiserweight contest.

The 42-year old Jones has lost three of his last five and six of his last eleven, including brutal knockout losses to Antonio Tarver, Glen Johnson, and Danny Green as well as one-sided decision losses to Joe Calzaghe and Bernard Hopkins. In his last outing, Jones struggled through a sluggish performance against Hopkins at the light heavyweight limit before dropping a wide, unanimous 12-round decision.

Lebedev, 31, is a southpaw pressure fighter fresh off a controversial split decision loss to WBO cruiserweight champ, Marco Huck in December. While having nowhere near the resume of Jones, Lebedev does hold dominant KO victories over Enzo Maccarinelli and Alexander Alexeev as well as the disputed loss to Huck.

Critics of the match-up point to the fact that the former pound for pound great, considered by most to be at least eight years past his prime, has shown diminished punch resistance and speed in his last several bouts– a point of concern when facing a a bigger, younger, world class, all-action fighter like Lebedev.

A US TV outlet has yet to be named.