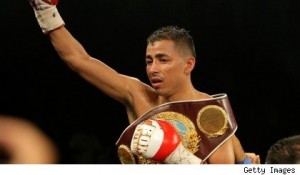 FIGHTER OF THE WEEK: GIOVANI SEGURA

Last year, Segura (27-1-1, 23 KOs) upset then unbeaten Ivan “Iron Boy” Calderon in a classic brawler vs. boxer match-up when the latter was forced to submit to Segura’s savage body attack in the eighth round. In Saturday’s rematch, Calderon (34-2-1, 6 KOs) was finished far more quickly. After boxing well for the first two rounds, Calderon was caught on the ropes in the third, and Segura absolutely let him have it. The powerful Mexican champion connected with a wicked shot to the solar plexus that sealed the deal, and the party was on in Mexicali.

Expect a quick move up in weight for Segura, who looks absolutely monstrous at 108. It will be interesting to see if larger elite fighters are able to withstand his excellent body punching. At the moment he looks like he could give just about anybody a very tough night.

While Hank Lundy and Patrick Lopez put on a pretty good show on Friday Night Fights, they were outdone by the flyweight title fight the following evening. In one of the most brutal fights the sport has seen in quite some time, Marquez (30-2-0, 23 KOs) went through hell before finally punishing Concepcion to the point where he was determined unable to continue.

The tone was set in the first round, when both men hit the canvas. Concepcion (22-2-1, 17 KOs) was the less skilled of the two, but his relentless aggression carried him through the first couple rounds. He seemed to have some amount of control when out of nowhere he was flattened at the beginning of the third. He took immense punishment the remainder of the round and, in fact, for the majority of the rest of the fight. He never gave in however, often bravely urging Marquez to keep throwing punches. The 10th was another classic; Concepcion was knocked down, but immediately got up and appeared to hurt Marquez badly towards the end of the round.

The ring doctor and referee decided early in the 11th that Concepcion’s left eye was too badly damaged for him to continue, perhaps robbing the fans of a more fitting conclusion, but likely in the best interest of a very courageous fighter who had taken a heck of a beating.


STORY OF THE WEEK: THE END FOR IRON BOY?

Any 36 year old fighter who has just been stopped in his second straight fight would likely be facing some questions about retirement. Ivan Calderon may have something left in the tank, however, as long as he can avoid opponents, like Segur, who are able to dominate him with size and strength. He did look good in the first couple rounds, and against an opponent of similar size, his superior tactical skills and speed would still be dangerous.

If he does decide to hang up the gloves any time soon, it will be the end of an excellent career that will likely earn him a spot in the hall of fame.


Sean Morehouse can be reached at morehouse1734@yahoo.com or followed on Twitter @morehouse17