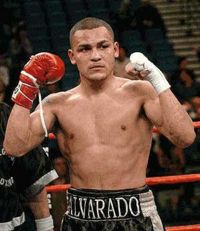 Mike Alvarado (29-0, 21 KOs) and Ray Narh (25-1, 21 KOs) will have huge shoes to fill as the replacement bout for the now-dead Humberto Soto vs. Urbano Antillon II match on the May 7th Manny Pacquiao-Shane Mosley pay-per-view card at the MGM Grand in Las Vegas.

The rematch of the Fight of the Year candidate fell apart due to management issues on Soto’s part and a rumored future deal with another promotional company. Instead, Soto will be fighting in June or July under a new promotional deal and Antillon, who remains with Top Rank, is rumored to be in consideration for a July 9th date against promotional stablemate, Brandon Rios.

Alvarado, the 30-year old jr. welterweight contender from Denver, has been buried on undercards against journeyman-level opposition.

Narh, 32, is from Accra, Ghana, but now resides in Pittsburgh. He has also fought an overall low level of opposition and is perhaps best known for his KO 1 loss to Almazbek “Kid Diamond” Raiymkulov in 2004 on the Oscar De la Hoya-Felix Sturm undercard.

The Alvarado-Narh twelve-rounder will be for the vacant WBC Continental Americas light welterweight title.