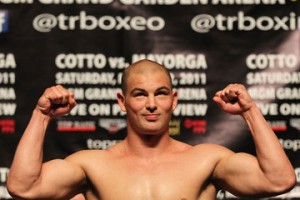 There’s been some debate in the boxing community about whether Tom Zbikowski, who holds a day job turning the brains of wide receivers into delicious gray matter soup in the NFL, is good for boxing. The debate would seem to have heated up some as Sideshow Tom first tested positive for marijuana in Oklahoma before a second test cleared his name. “The guy’s taking a spot away from legitimate fighters”, say some. “Any exposure is good exposure”, say others.

In my regular gig covering ESPN’s Friday Night Fights, I’m always up for a good swing fight. When the main event (and, on some nights, the co-feature) end in Hobbesian fashion, nasty, brutish, and short, the Worldwide Leader gets a chance to showcase some guys who would otherwise be fighting off-air and who get the chance to maybe catch the eye of some promoter or boxing writer who can then advance their careers. Sometimes it works out beautifully. Other times, it’s cover-your-eyes awful. But then again, boxing in general is like that. For every Ward-Gatti I, there’s a corresponding Tyson-McBride or Holyfield-Ruiz. The point is that the swing fight ought to be a nice chance for a young, up-and-coming professional to make his name and make a few extra bucks before he has to turn around and spend them on the medical expenses that the sanctioning bodies and commissions don’t cover…but that’s another column entirely.

This is why I don’t much care for the Sideshow Tom hype. Putting Zbikowski on TV means taking a televised spot away from a guy who needs it more than an NFL millionaire does. And what’s more, a football player beating up some schlub off the street, who isn’t making any more money to be beaten silly by a free safety than he would to be clobbered by a future champion making his pro debut, tends to be a boring fight. It’s rubbernecking at a bar. All it needs is some Asian foods company sponsoring it and we could call it the Sweet and Sour Science.

Back during the 18th century, the French nobility would set up “farms” that existed for no other purpose than to let the Marie Antoinettes of the world play at being shepherds so that they could get a false sense of being one with their subjects. Of course, we all know how the 18th century turned out for Marie Antoinette. The general public didn’t take too kindly to these interlopers making a mockery of their way of life, and they really would far rather have had that farmland for themselves so they wouldn’t have to be told to go eat cake.

The same is true of a boxing ring whenever these locked-out football players get it in their heads that they’re going to take a televised spot away from a deserving fighter. But I’m not suggesting we let Sideshow Tom eat cake. I’m suggesting we put him in there with a real cruiserweight fighter and let him eat straight right hands. The end result will be the same for Zbikowski as it was for the Bourbon royalty— “off with their heads!”

Fox Doucette covers Friday Night Fights for The Boxing Tribune. His sophomore history professor can die in peace knowing at least one student was paying attention.