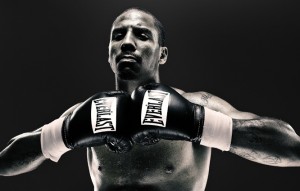 Abraham vowed to come to fight and he lived up to his word in the first round as he deviated from his usual passive, “wait and see” high guard style and stalked Ward, throwing punches with bad intent.

It took Ward about a round to adjust to this unexpected change in style from the Armenian-born German former middleweight titlist, but once the Olympic gold medalist found his rhythm, he began to systematically break Abraham down.

From the fourth round on, Ward peppered Abraham from the outside, wearing down his opponent with hard jabs to the head and body and shots upstairs that got through and around Abraham’s high guard defense.

The native of Oakland, California now advances to meet the winner of the June 4th Carl Froch-Glen Johnson contest.

On the non-televised undercard, a hard-charging and relatively svelte Chris Arreola (31-2, 27 KOs) took out Nagy Aguilera (16-6, 11 KOs) in three rounds.

Aguilera attempted to box Arreola, who weighed-in at 234 lbs., but found himself trapped on the ropes on more than a few occasions.

The end came in the third, when a sustained barrage from Arreola with Aguilera pinned against the ropes convinced the referee to wave off the contest. The decision could be classified as a bit premature, but Arreola was in full control at the time of the stoppage.