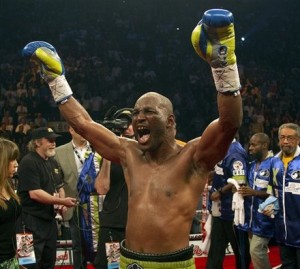 Unlike their first encounter, a controversial draw last December, Hopkins came out fairly aggressive, not landing anything significant, but succeeding in pushing Pascal back and throwing off the 28-year-old fighter’s rhythm.

Despite dropping three of the first four rounds on The Boxing Tribune’s scorecard and getting buzzed by a big shot in the closing seconds of the fourth, Hopkins had established both the pace and the distance at which the rest of the fight would be fought.

Hopkins proceeded to put on a clinic of old school fighting, smothering Pascal’s punches, roughing up the defending champion in clinches, and nullifying the Haitian-born Canadian with timed straight right hands and smart feints. The seemingly rejuvenated Hopkins even managed to shake Pascal several times throughout the contest, mostly with an overhand right that silenced the partisan pro-Pascal crowd and even convinced some to start a “B-Hop” chant.

Pascal, desperate and frustrated, succeeded in shaking Hopkins in the twelfth round, but was unable to drop the 23-year veteran.

The questionable scoring in their first fight made for some tense moments while waiting for the scores to be read, but the judges came away with the correct decision: 116-112, 115-114, 115-113– all in favor of Bernard Hopkins. The Boxing Tribune also scored the fight 115-113 for Hopkins.

In the televised opener, Chad Dawson (30-1, 17 KOs), with new trainer Emanuel Steward, bested pressure fighter, Adrian Diaconu (27-3, 15 KOs) decisively to take the unanimous decision and the right to take on the winner of the Pascal-Hopkins contest.

Dawson, who lost his world title to Pascal via technical decision last August, showed occasional signs of the aggression and power he was looking to add by hiring Steward, but failed to light up the Bell Centre with activity or urgency.