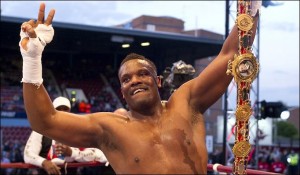 After coming close to landing a big-money, high-profile shot at heavyweight kingpin, Wladimir Klitschko, British heavyweight champ, Dereck Chisora (14-0, 9 KOs) will have to settle on a defense of his belt against top UK contender, Tyson Fury (14-0, 10 KOs).

Chisora-Fury, to be held July 23, at Wembley Arena, will likely be a big-ticket item in the UK, given both fighters’ outgoing personalities and willingness to engage the media.

“Chisora’s talked the talk and now he needs to walk the walk,” Fury told the BBC. “Let’s see if he is man enough to get in the ring with a dangerous, young, live opponent for the first time.”

Chisora won the British heavyweight title in May of 2010 and defended it for the first time in December, scoring a TKO over former Commonwealth titlist, Sam Sexton.

Fury, despite a strong media presence, has yet to face opposition above the level of journeyman, but has looked solid in disposing of fighters such as John McDermott and Zack Page.