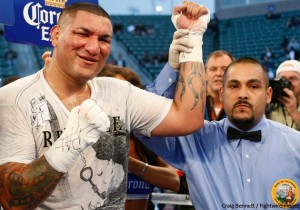 This week, the ESPN2 caravan rolled into your friendly neighborhood commentator’s Reno home base, which meant that instead of our usual spot reporting on the television broadcast, The Boxing Tribune was live at ringside to cover this week’s “Blame It On Reno ESPN Style” Friday Night Fights card. As such, not only the on-air fights but also the swing and undercard off-air fights will be part of the tale this week. Big thanks are in order to Goossen Tutor Promotions for making this possible, and to the staff at the Downtown Events Center for putting on a great night of boxing entertainment. Hats off to all of you.

The main event featured Chris Arreola (32-2, 28 KO), who had so little energy expended in his knockout of Nagy Aguilera two weeks ago that he was ready and willing to fight on that little rest. The new, svelte, committed Arreola had a game but overmatched Kendrick Releford (22-15-2, 10 KO) as the latest sacrificial lamb put in front of him to keep his skills sharp and his record intact while his promotion team waits for the Tomas Adamek-Vitali Klitschko showdown in September. One of those guys will get his rematch, it is merely a question of who wins.

Releford showed a strong chin and not much else during a seven-round pummeling in which Arreola was able to split the guard with uppercut after uppercut. The Fort Worth, Texas journeyman found himself constantly on the back foot, able to occasionally catch Arreola with shots of his own but never able to keep the former title challenger at bay. In the sixth round, Releford’s chin finally cracked, as Arreola backed him into a corner with a barrage of punches and forced him to take a knee. The next round was hardly better, and finally at the 2:43 mark of round seven Arreola had his scalp. This writer had the fight 60-53 through six rounds prior to the stoppage, with Releford never showing any sign at all that he was anything other than an opponent to give Chris Arreola some ring work that he did not get in his easy win over Aguilera.

The co-main event, an IBF title eliminator, pitted Samuel L. Jackson lookalike Tony “The Tiger” Thompson (36-2, 24 KO) against Maurice Harris (24-15-2, 10 KO), who was the USBA heavyweight champion. Whether this means there is an actual USBA or whether the belt was simply acquired via Cracker Jack box is anyone’s guess, because Harris looked nothing like a champion and everything like a guy who had no business against a consensus top-ten heavyweight. Thompson had a “what’chu lookin’ at, chump?” smirk on his face from the opening bell and cruised to an easy victory. It was simply a matter of when Harris would break, and a knockdown in the second round and mercy stoppage by referee Vic Drakulich at 1:51 of the third round sealed the easy night for Thompson. Thompson’s next opponent is likely Eddie Chambers, with the winner of that bout becoming the mandatory challenger for Wladimir Klitschko’s IBF strap at heavyweight.

In the sideshow bout of the evening, Javier Molina (6-0, 4 KO) went six rounds with David Lopez (3-6-3, 0 KO). Lopez must truly enjoy the role of villain, because he came into the ring wearing the colors and logo of Boise State football, whose arch-rival the University of Nevada is located five blocks from the arena in which he fought tonight. The crowd was screaming for blood from the opening bell and Molina must have felt like he was fighting in his own backyard—wearing blue and silver trunks (Nevada’s colors, although there was no direct connection there), Molina was the obvious fan favorite. Lopez was clearly in as a punching bag, falling on his duff in the first round and mounting a challenge only in the fifth when Molina stepped off the gas and took a shot flush on the chin toward the end of that fifth round. It is likely testament to David Lopez’s complete lack of power (no knockouts in 12 pro fights) that Molina was not dropped by that punch. The judges had it 60-53, 59-54 (twice), while Teddy Atlas scored it 60-53 and The Boxing Tribune had it 59-54 with the fifth round going to Lopez.

Off-air, Michael Ruiz Jr. (8-0-1, 3 KO) and Jonathan Alcantara (4-4-2, 0 KO) fought an entertaining six-rounder in which the bad blood between the two men due to the draw in their first fight was on full display. Alcantara came out trying to carry the action, but his lack of power and extremely wide punches meant that he was unable to impress the judges. This writer had it 58-56 for Ruiz simply because the unbeaten fighter had two rounds, the first and the fourth, where he simply did not throw enough punches back to merit scoring the rounds for him, but the judges at ringside had it 59-55 and 60-54 (twice), making the fight look more lopsided than it was.

Former Olympian Ricardo Williams Jr. (18-2, 10 KO) showed why eleven years can be an eternity for a fighter, as he went from the bright lights of Sydney at the Games to the darkness of off-air boxing, fighting a dreadful action-free fight against Chris Gray (13-15, 1 KO). Williams won the fight 58-56, 59-55 (twice), with this writer scoring it 59-55 and the bout itself quite possibly providing less entertainment than the Julio-Adjaho main event from last week.

Finally, the last bout of the night after the televised event went off-air gave us Guy Robb (4-0, 1 KO) showing plenty of talent and not much explosiveness in an easy four-round unanimous decision (40-36 on all three cards plus The Boxing Tribune’s) over Noe Lopez Jr. (8-8, 5 KO) that drew a few cheers from those who remained to watch it. It was a classic example of this columnist’s belief that undercard fights can be every bit as enjoyable as main events, as what the combatants lacked in skill they made up for in their willingness to let their hands go and give the crowd something to cheer about.

All things considered, there is truly no greater sport in the world for the in-person fan than the Sweet Science, and for $29.50 apiece for the cheap seats, we challenge anyone to find a sport that provides a better bang for the night-out buck than boxing. Next week, the FNF bandwagon rolls into Tampa, Florida with Cuban welterweight Yudel Jhonson taking on Jose Miguel Torres in the main event. The Boxing Tribune will be back in its regular role of covering the ESPN2 broadcast, which airs at 9 PM Eastern/6 PM Pacific.

Fox Doucette covers Friday Night Fights for The Boxing Tribune. He hopes the Eldorado Casino had fair warning that Chris Arreola was coming to their buffet after the fight so the chef could make enough food for Arreola’s famously outsized appetite. Find Fox on Facebook at facebook.com/MysteryShipRadio.