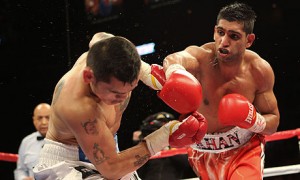 After WBC/WBO champ, Timothy Bradley refused to come to terms with the UK champ for a Summer unification bout, Khan’s promotional team, Golden Boy, went looking for a suitable replacement and entertained several possible foes for the high-profile bout.

Zab Judah, the former welterweight and three-time jr. welterweight champ, wasn’t hard to find, as he immediately put his name on the list of willing replacements.

After brief negotiations and a compromise on venue and money split (55-45 in favor of Khan), both fighters are now verbally on board for the bout, which will have major implications in the smoking-hot 140 lb. weight class.

In Khan’s last contest, he bested Ireland’s Paul McCloskey in a lackluster six round technical decision. Prior to that, the former Olympic silver medalist scored back to back impressive wins over Marcos Maidana (UD 12) and Paulie Malignaggi (TKO 11).

Judah is coming off an impressive TKO 7 win in March over Kaizer Mabuza for the vacant IBF title.