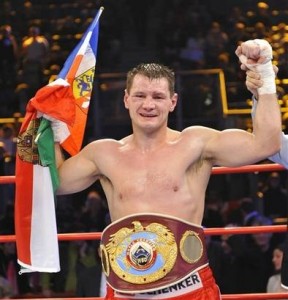 Zsolt Erdei (32-0, 17 KO) will take on former super middleweight titlist Byron Mitchell (28-7-1, 21 KO) on the undercard of Saturday’s Froch-Johnson Super Six Semifinal bout. The bout, which is scheduled for 10 rounds, will be contested at the light heavyweight limit of 175 pounds, and will take place at the Adrian Phillips Ballroom at the Boardwalk Hall in Atlantic City, New Jersey.

Erdei won the WBO’s version of the light heavyweight title in a January 2004 bout with Julio Cesar Gonzalez. He made 11 consecutive defenses of his title before vacating to move up to the cruiserweight division and capture the WBC belt. Erdei returned to the light heavyweight division after his title winning effort and shut out Samson Onyango over 8 rounds on the undercard of November’s Paul Williams-Sergio Martinez rematch.

Byron Mitchell, now 37 years of age, twice won the WBA super middleweight title, beating long-time champion Frankie Liles in 1999, before recapturing the vacant strap in a win over Manny Siaca in 2001. Coming into Saturday’s fight, Mitchell has dropped 3 of his last 4, all via TKO.