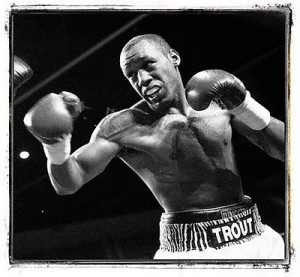 From the very beginning, Trout moved effectively and showed himself to be too talented and athletic for the straight-ahead Lopez, who came forward the entire night, but wasn’t able to generate any sustained offensive attack.

Trout, well ahead and landing at a high rate, gave a solid effort for the full twelve rounds and even managed to drop the tough veteran in the eleventh round.