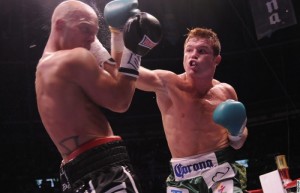 From the opening bell to the final moments, Alvarez was in full control. Working behind an improved defense, the 20-year-old WBC jr. middleweight belt holder landed effectively and gradually broke down a mobile and inconsistent Rhodes, who could never get any offense going. The native of Jalisco, Mexico would drop Rhodes in the fourth round, but never vary from his steady, effective pace, winning each round going into the last.

In the twelfth and final round, Rhodes’ corner informed their fighter that he needed to put it all on the line, but it was Alvarez who came out with urgency, landing some big shots to the body and head that caused the referee to stop the contest just as Rhodes’ corner was throwing in the towel.

On the televised undercard, Adrien Broner (21-0, 17 KOs) made up for last March’s lackluster performance against Daniel Ponce de Leon by scoring a brutal first round TKO over Jason Litzau (28-3, 21 KOs).

After nearly a full round of nothing, Broner connected with a hard, straight right hand that put Litzau in bad shape along the ropes. From there, it was just a matter of time as the 21-year old native of Cincinnati pounced on his opponent, landing some brutal shots and forcing the referee stoppage at the 2:58 mark.