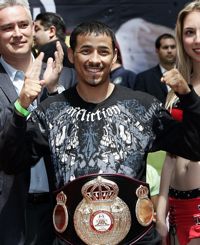 Musica Hall, Toluca, Estado de México, Mexico– Miguel Vazquez (29-3, 13 KOs) made the second defense of his IBF lightweight title by stopping an overmatched and passive, Marlon Aguilar (25-11-1, 18 KOs) in the second round of their twelve round contest.

Vazquez came out boxing, but quickly turned hunter when he saw no real offense coming his way. The defending champ buzzed his challenger with a shot at the end of the first round and came out for the second, intent upon ending the contest.

A short uppercut would send Aguilar to the canvas and, seconds later, an offensive barrage from the defending champ would drop him again. Aguilar would beat the count, but the referee had seen enough and called an end to the contest.

(For the report of the Alvarez-Rhodes, Broner-Litzau HBO double header, click HERE)