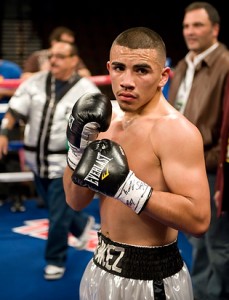 Gomez sent Proctor to the canvas in the third round and finished the job in the fourth with a barrage of straight right hands and left hooks that convinced the ref that it was time to to wave off the fight.

Santiago came to win and was competitive throughout, but Caballero’s heavier hands and more fine-tuned technique made the difference, winning him him each round on The Boxing Tribune’s scorecard.

* For a recap of the Friday Night Fights card in San Antonio, TX click HERE