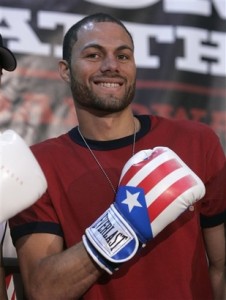 Saturday night on Showtime most eyes will be tuned in to see the potential war between Brandon Rios and Urbano Antillion. In the televised portion of the undercard, however, there will be another match-up that could be potentially interesting.

Hard-punching Kermit “The Killer” Cintron will be fighting for the first time in over a year when he takes on “King” Carlos Molina.

The last time Cintron (32-3-1, 28 KOs) was in action, he lost a technical decision to Paul Williams in a bizarre fight when he fell out of the ring during the fourth round. The doctor determined he was unable to continue and due to the California rules, under which the bout was fought, just over three rounds completed was enough to go to the judge’s scorecards.

Molina, (18-4-2, 6 KOs) on the other hand, hasn’t lost in his last 11 fights. This includes a draw against unbeaten prospect Erislandy Lara.

The Showtime card will start at 10 p.m. eastern time in the United States.