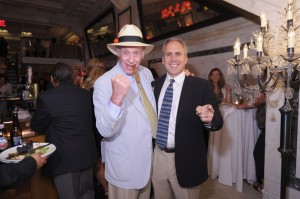 While soon-to-be-former HBO Sports President, Ross Greenburg is an easy target for critics, those looking to blame the TV executive for the downfall of the sport or, even, the downfall of HBO Boxing are over-simplifying matters.

Like blaming Barack Obama or George Bush for the state of the US economy, the fingers pointed at Ross Greenburg show more partisan push than real analysis.

When the veteran TV executive got promoted to the lofty position of President of HBO Sports, little did he know the mess he was getting himself into. By Greenburg’s own admission, about 70% of his time was spent dealing with egos and attempted power plays by boxing’s cadre of misfits, carpetbaggers, and confidence men.

Greenburg, by nature, is a corporate guy ill-suited for dealing with the carnival barkers and side show freaks who run the sport. Hence, his affinity for dealing with guys like Golden Boy CEO, Richard Schaefer, who worked in the banking industry and manager/adviser, Al Haymon, who likes to talk target demographics and sales projections.

The fact that Greenburg was never really a “boxing guy,” has also added to the wrong turns and missteps the network suffered through during his eleven years as head of HBO Sports.

But the real problems with HBO Boxing go beyond Andre Berto, Chad Dawson, or any other fighter given access to HBO airwaves against the better judgment of know-it-all armchair experts.

The real downfall began in the 70’s and 80’s when network TV finally threw in the towel with boxing. The sport’s power brokers, unwilling to actually work on the reasons boxing was becoming toxic to advertisers, took the show to upstart premium cable outlets, like HBO and Showtime, eager to add programming to an empty broadcast slate.

These pay networks would bring in legendary figures such as Muhammad Ali, Joe Frazier, George Foreman, Larry Holmes, Sugar Ray Leonard, and Tommy Hearns, right up to stars like Mike Tyson, Pernell Whitaker, and Evander Holyfield– all fighters who had already cut their teeth on free, network TV and brought with them an established fan base and mainstream media buzz.

On the other hand, the fighters emerging under Greenburg’s reign would represent the first generation of fighters who hadn’t enjoyed the benefit of free network exposure. In essence, HBO was trying to build an audience from a base that had already been cut to a fraction, isolated from exposure to new fans, and willfully removed from the mainstream sports community.

The questionable matchmaking decisions and odd scheduling moves coming from the HBO corporate offices didn’t help any, but the diminishing returns were a foregone conclusion from the moment free TV got sick of dealing with a sport that refused to regulate itself.

The fingers pointed at Greenburg’s decision to sign guys like Andre Berto and Timothy Bradley, who have no discernible fan base of their own, is pure red herring. Other than Manny Pacquiao, Floyd Mayweather, and to a lesser extent, fighters with ethnic niche markets like Miguel Cotto, are there any fighters in the US with discernible fan bases?

If the “Greenburg Factor” were real, Showtime, which has been putting together some outstanding shows and quality match-ups, would be cleaning up, right? Instead, the rival premium network has also struggled with numbers, even for its supremely well-regarded Super Six super middleweight tournament.

If anything, Greenburg’s missteps have alienated some loyal fans and have often made HBO Championship Boxing something less than “must see” TV, but televised mismatches are nothing new to boxing fans and HBO’s Andre Berto-Freddy Hernandez blow-out is no more obscene than Showtime’s Andre Ward-Shelby Pudwill romp.

At the end of the day, Greenburg was an ill-suited executive inheriting a damaged product. The best his successor can hope for is to stop the continued loss of hardcore fans.

A focus on well-crafted, quality match-ups is the first step forward, but the rest of the journey involves a concerted effort from the entire boxing community to stop being the red light district of sports.

A return to free TV is the key to rebuilding boxing and, in turn, revitalizing the HBO brand. But will the sport start to truly work on itself or merely choose to point fingers at another convenient scapegoat?