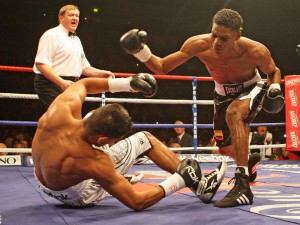 “Just how dangerous is Prescott?” asked Ian Darke as the bell rang to begin the lone round between Colombian Breidis Prescott (24-2, 19 KOs) and current WBA junior welterweight champion Amir Khan (25-1, 17 KOs). For 54 brief and brutal seconds, a contest between then-unbeaten fighters in Manchester, England appeared to turn the entire narrative of Khan’s career on its ear as Prescott dropped Khan twice, the latter knockdown resulting in Terry O’Connor reaching the count of ten.

At the time, Khan was a lightweight. Did the loss to Prescott stop Khan from achieving his goals? Did it set his career back for ages? Of course not. Khan won a tune-up fight against Oisin Fagan three months later, then in February of 2009 beat Marco Antonio Barrera on a technical decision after a cut caused by a clash of heads made Barrera unable to continue. Khan had his title at lightweight and five months later moved up to grab Andriy Kotelnyk’s WBA strap at 140. Four defenses later he now has his big money fight, a unification contest this Saturday against Zab Judah (41-6, 28 KOs), who found his IBF belt in a box of Cracker Jack this past March.

Meanwhile, what did Prescott do after his career-defining win? Did he parlay it into a title shot with the WBO, who sanctioned the Khan fight for a minor strap within the organization? With a signature victory in his pocket, did he move on to bigger and better things?

Of course not. His next fight was a bizarre disqualification win over Humberto Toledo after Toledo bit Prescott on the shoulder in the tenth round on a Friday Night Fights main event on ESPN2. A split decision loss to Miguel Vazquez on FNF in July of 2009 followed by a wide unanimous decision loss to Kevin Mitchell in December for the very strap that Prescott vacated (and Khan won in the Barrera fight) served mainly as an indictment of Amir Khan—if this is the guy who knocked the Bolton native out, what does that say about Khan’s chin?

A much bigger question lurks, however. Why has Breidis Prescott’s promotional team been unable to get him a big fight? There’s the obvious answer—that Amir Khan is afraid of him and refuses to fight a rematch because of a very real fear that he will be knocked on his ass again the way he was in the first fight. Weight is not an issue; Prescott moved up as well and is 3-0 with a knockout at 140, including two wins on Friday Night Fights to keep his name in the mind of American audiences.

But Prescott needs Khan more than Khan needs Prescott. This runs the risk of becoming a Captain Ahab situation. At what point will Prescott get into the ring against a top-ten contender at junior welterweight? Prescott essentially called Lamont Peterson a bum when he was trying to get a fight with Khan earlier this year—why not fight Peterson on FNF? Lamont is ranked #8 by Ring Magazine and the fight would be a good, honest scrap that would catch the attention of the major sanctioning bodies and promoters alike.

Prescott has an even bigger problem—if he is to position himself as a legitimate challenger for that WBA Super belt or the IBF belt, he must capture it either directly from Khan (or Judah, if Zab pulls the upset Saturday night) or maneuver himself into position by grabbing the WBC or WBO belt. Trouble is, Timothy Bradley has those belts and Prescott knows he wouldn’t stand a chance against the legit #1 guy in the division—not yet, at least. So he’ll have to fight guys like Peterson or Lucas Matthysse or Kotelnyk and hope like hell that it’s enough.

Or—and this may come as a radical suggestion—he could try making a name for himself as someone other than a puffed-up Colombian who has one big win on his entire pro resumé. Moving back to lightweight, taking a fight against Hank Lundy or John Molina or even a fringe guy like Patrick Lopez on FNF, setting his sights on Miguel Vazquez’s IBF strap (the same Vazquez who beat him two years ago), and making his name as someone other than “that guy who beat Amir Khan” would do his legacy and his legitimacy some good.  A reputation as a player at his weight in the game would more than likely make him more money than a high-risk, high-reward super gambit against his personal Great White (or Arab) Whale.

One thing is certain, though—when a guy who has just been knocked completely senseless in front of a capacity crowd of his own countrymen ends up going on to a far more glorious career than the guy who administered the beatdown, it bears an examination as to why. And Breidis Prescott still has done nothing to answer the question in the ring unless you count his lackluster 2009 as the answer. The Khanqueror runs the risk of becoming the Buster Douglas of the lightweights. His people have the ear of the matchmakers at ESPN—let’s see them do something with it.