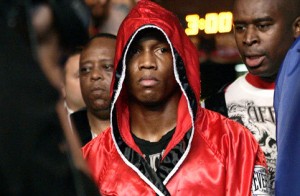 When Zab Judah landed a hard left uppercut on the chin of Kostya Tszyu in the first round of their 2001 jr. welterweight title unification bout, causing the Russia-born Aussie to go into full retreat, it looked as though his speed and athleticism would make quick work of Tszyu. After dominating the first round, Judah moved around the ring in the second, deftly slipping the wild punches of the patiently-stalking Tszyu.

With each slipped power shot, Judah let his technique slip slowly away, and Tszyu began to land his vaunted right hand. But the landed shots did little to convince Judah to keep his hands up or move laterally instead of straight back. With less than 10 seconds remaining in the second round, Tzsyu connected with a straight right hand that sent Judah to the canvas. He quickly got to his feet only to find that his legs were suggesting he stay down and collect himself just a little longer.

After Judah stumbled and staggered back down, referee Jay Nady called an end to the fight with no time remaining in the round. A fight that began with Judah’s brilliance and dominance turned on a dime and ended in chaos, as an enraged and defiant Zab Judah protested the stoppage. Judah went so far as to press a glove to Nady’s neck as his father and former chief trainer, Yoel Judah, tried to reign in his volatile son.

With a combination of speed and power possessed by few in boxing, Zab “Super” Judah (41-6, 28 KOs) has looked like he belonged in the ring with the best names in the sport. At other times he has been an utter disappointment, often on the same night, and this has become a recurring theme of Judah’s long career.

Three months later, both Judahs made an appearance against Floyd Mayweather Jr. Judah looked great in the early rounds, but faded in the second half of the fight and dropped a comfortable decision to the future box office king. One year later, Judah nearly had Miguel Cotto out early in their WBA welterweight title fight, but let Cotto off the hook and was battered into submission in the 11th round. The verdict was in. Zab Judah was incomplete, a track star in a marathon sport, if you will.

After a brief period spent toiling away on ESPN’s Friday Night Fights and Independent Pay-Per-Views, Judah found maturity, religion, and the peace of a traditional family structure. A more focused and dedicated Judah found himself back on HBO, and promised a re-invented version of his former self. Judah was set to take on Argentine slugger Lucas Matthysse for the WBO and IBF #2 rankings last November. Judah’s hand and foot speed kept the slower-footed Matthysse a step behind in the early rounds; rounds spent absorbing heavy amounts of punishment to the body.

Over the second half of the fight, Judah was hesitant to let his hands go, as Matthysse began to land upstairs. Despite losing many of the later rounds and having to pick himself up from a tenth round knock down, Judah went on the win a controversial split decision, earning the right to face Kaizer Mabuza for the IBF jr. welterweight strap.

Still plagued by the labels given to the young Zab Judah that faded in big fights against world class opposition, he hired defensive wizard and Hall of Famer Pernell Whitaker as his trainer. The investment seemed to pay off, and Judah dominated his less-than-world-class opponent, Kaizer Mabuza. After 6 brilliant rounds, Judah finished off his hard-charging opponent with a series of power shots that left Mabuza out on his feet in the corner.

The Judah-Whitaker experiment passed its first tests. Judah’s defense and focus were much improved. One question remained, however; would Judah’s focus and conditioning hold up against elite level competition?

Zab Judah can add another trophy to his mantle on Saturday night. His long, up-and-down career has seen a revival, or sorts, and he is back on HBO World Championship Boxing, taking on WBA jr. welterweight champion Amir Khan at the Mandalay Bay Resort and Casino in Las Vegas, Nevada. Amir Khan (25-1, 17 KOs) is the best (active) boxer in the jr. welterweight division right now (Timothy Bradley is consensus number 1, but he is inactive and possibly moving to welterweight). Khan is young, tall, fast, and has considerable power and boxing ability. Khan isn’t perfect, but he represents a big challenge indicative of Judah’s realistic chances against the elites. A win over Khan would put Judah back on top, and would make him a more viable candidate for big paydays against Floyd Mayweather or Manny Pacquiao.

As we’ve seen in the past, Judah has shown a tendency to wilt under the prolonged exposure to pressure. Saturday night Judah can prove the naysayers wrong; those that have said he can’t hang with the true elites. Another dominant performance from a rejuvenated and re-dedicated Judah will help him shake the label and prove he can turn in a complete, brilliant performance against the best in his division.