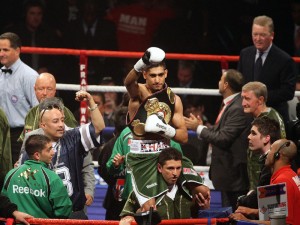 The 24-year-old Khan was in command throughout the bout– too big, too strong, and even too quick for the 33-year-old Judah. By the third round, the Brooklyn native had already resorted to looking for one big shot rather than follow a real game plan while his younger, more inexperienced rival was fighting smartly and piling up points.

The end came in the fifth when Khan landed a thudding body shot that appeared to be right below the belt line and Judah immediately went down to his knees, either unable or unwilling to beat the referee’s count.

“I feel like I haven’t even been in a fight,” Khan told Max Kellerman during the post-fight interview. And, with the exception of two or three solid shots from Judah the whole night, he was right on the money.