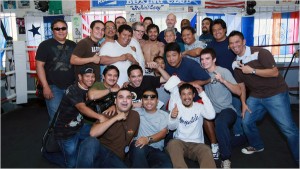 Against my better judgment and at the expense of potentially more productive hobbies, I have to admit that I enjoy watching the odd and often frustratingly humorous world of Team Pacquiao.

The center of the self-contained Pacland universe, of course, is Manny Pacquiao. Around the Filipino Phenom, though, is an ever-growing mish-mosh of dim-wits, dip-shits, criminals, and thugs who, when not busy feasting on Manny’s generosity and need for reverence, do their best to muscle other hangers-on and yes men out of the picture.

Pacquiao’s decision to bring in an outside firm to review the business structure of his empire has sent a shock wave through this group of modern day carpetbaggers, all the way from the closest confidantes in the inner circle, right through to the pandering, penny-click pilot fish in the media (branded, by yours truly, as the Pacquiao Press Corps) who have based their lives and livelihoods on writing pure publicist pap about Pacquiao for his adoring, loyal fan base.

Most recently, the internal tug of war in Team Pacquiao has spilled over into the land of the Pacquiao Press Corps, with a Bob Arum/Michael Koncz contingent going on the offensive against the apparent new guard of Pacquiao confidantes.

In recent days, Timothy “James” Sladeck of Pacquiao’s official website, MPboxing.com (AKA mp8.ph), has come under attack from veteran trend-hoping scribe, Michael Marley, who penned a scathing Examiner.com article, chronicling Sladeck’s criminal past and alleged attempts to leverage his relationship with Pacquiao into several money-making ventures.

The article, later removed by Marley, himself, described Sladeck as a “hustler’s hustler” and as an ambitious gadfly who “lies like a flea-ridden dog” and whose ultimate goal is to “shove beleaguered agent Michael Koncz aside and to take over all boxing operations for the Pinoy Idol.”

Marley would go on to mention Sladeck’s alleged attempts to barter side deals regarding movie ventures and a Pacquiao theme restaurant in San Francisco. As Marley put it: “You see, in any commercial deal or enterprise involving the name and or likeness of Pacquiao, the guy…always wants his money secured and delivered secretly so that neither Pacman or any of his henchmen know about it.”

Sladeck, via his own pulpit at MPboxing, returned fire, pointing out that Pacquiao did, indeed, know about all of those side ventures and that Marley, who had his lawyer’s license suspended in 2004 for seven counts of misconduct, was guilty of the very same ethical conflict he levied at Sladeck.

Sladeck posted a portion of an email forwarded to him where Marley, who is not formally affiliated with Team Pacquiao, tried to leverage his relationship with Pacquiao promoter, Top Rank, into a money-making deal for himself. When approached for Bob Arum contact info by an entertainment industry company wanting to invest $150 million into a potential Mayweather-Pacquiao bout, Marley jumped at the opportunity. He replied with an offer to broker a sit-down with both parties.

When contacted to provide an explanation of this request, Marley told The Boxing Tribune: “I was asked as an attorney to deliver a meeting with the “deciders” on both sides. In the past, as an attorney, I have directed fighters and/or promoters to the gentlemen who handle Floyd and Manny. My requested fee was to set up meetings with the key parties in both camps.”

However, in a call made to a source close to the situation (who chose to remain anonymous) , The Boxing Tribune was informed that this group had not contacted Marley as an attorney or in any capacity other than as someone who might have contact info for Bob Arum. According to the source, the potential investors were led to believe by the scribe that he had unique ability to arrange for a sit-down with representatives of Pacquiao and Mayweather. They never responded to Marley’s request for a fee.

Marley’s ethics notwithstanding, this leads to the question of why the sudden offensive against MPboxing and Timothy Sladeck just as the word of Pacquiao adviser Michael Koncz’s firing or demotion hit the street.

“I know for a fact that 100% of everything that Marley wrote came from Michael Koncz,” the insider said.

The source, who has had regular contact with all parties since the in-fighting began, went on to say that it was Koncz who then made Marley pull his Examiner.com hit piece on Sladeck, fearing a backlash from Pacquiao for airing insider dirty laundry in public.

As a matter of fact, The Boxing Tribune was told that prior to the suddenly cancelled all-out attack on Sladeck, Marley, with the backing of Koncz, had intended on fingering Sladeck as the member of Team Pacquiao who had sent Team Mayweather the now-infamous email asking about possible repercussions if Manny tested positive for PEDs. Marley teased the big revelation in his July 19 column, promising to out the guilty party the following day and even using the word “juice” in the tease, referring to Sladek’s past as a body builder and self-admitted steroid abuser. Of course, that day never came and the big revelation was left up in the air.

It has long been rumored that Michael Koncz was pushed into his lofty position within Team Pacquiao as a mole and stooge for Bob Arum, who feared loss of control over a fighter, literally, on the other side of the planet.

Last week, it was revealed by The Boxing Tribune that Pacquiao, who has generated close to $400 million in PPV revenue and whose endorsement deals, alone, are worth in the ballpark of $50 million, has a ridiculously low net worth of $26 million. The report was preceded by the announcement that Pacquiao would now be using outside firm, VisionQwest, to go over past contracts and handle all financial dealings. Then, it was announced that Michael Koncz would be fired and/or demoted to a decisively less important role in Team Pacquiao.

All of this tells the story of a Manny Pacquiao who may be suddenly coming to terms with the complex struggles within his own team, which, as The Boxing Tribune’s inside source puts it, comes down to “Top Rank vs. (Pacquiao long-time personal attorney) Franklin Gacal.” From a recent Fighthype.com interview with strength and conditioning coach, Alex Ariza, it’s apparent that insiders Ariza and Freddie Roach are firmly on the side of Gacal while Koncz, Top Rank, and their friendly media outlets may have been pushed to the fringes of the Pacland self-contained universe.

This also tells the story of a fringe media all too happy to run interference for one side of the squabble in exchange for continued “insider” access and, in Marley’s case, possibly some financial benefit.

Gut instinct says that the rats will find a way to survive because, well, that’s what they do.

UPDATE: It was announced by Fighthype.com that Michael Koncz has regained “full adviser” status in Team Pacquiao, at least for now.

Got tips, leads, insider info? Email Paul Magno at paulmagno@theboxingtribune.com. Paul is a certified iconoclast and a full member of the Burger King Kid’s Club.