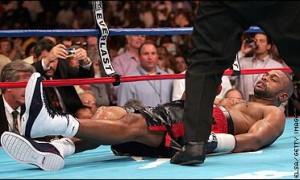 Why do fighters stick around for years beyond what’s safe and practical?

A true warrior wants to go out on his shield and, frankly, the adrenaline of a big fight night is addictive. Tragically, though, most fighters wind up in need of money— especially at the end of their careers.

Here are seven veteran fighters who might need the money and crave the excitement, but desperately need to reconsider their decision to keep on fighting:

The former four-division world champion has been brutally knocked out in four of his last 12 bouts and has not come close to beating an elite world class fighter since 2003. In his prime, Jones was as supremely gifted and absolutely dominant as any other fighter in the history of the sport. The 2011 version of “RJ” is little more than a spectacular KO victim for any top fighter who can generate a good payday. The 42-year-old HBO commentator should follow the advice he recently issued to Paul Williams in a World Championship Boxing telecast. He should hang up the gloves and call it a career.